Technology is king in today’s society, and students at Ursuline College Chatham are spreading their knowledge on coding with elementary schools in Chatham with an Hour of Code.

Computer science and math teacher at UCC, Jennifer Torrance, took her Grade 10 computer science class to St. Agnes School recently to teach the Hour of Code program, which uses industry giants and several celebrities on video to explain how fun and easy coding can be once you get into it.

The second part of the program is interactive, using the creators of the popular Minecraft video game, Mojang, and its lead designer and programmer Jens Bergensten to walk the students through actual coding of a Minecraft character.

“The Hour of Code comes from the site code.org so it was an initiative that was started basically to get more kids coding. They partnered up with a lot of major people in the industry and if you go on the code.org site, you’ll see videos with Bill Gates and Mark Zuckerberg and all these really big guys are involved,” said Torrance. “The counts every year are into the millions, trying to get as many kids as possible coding. The information on the site is free to use and they just want to share it with people.”

Torrance heard about the Hour of Code from a colleague who was doing it with her classes. She said while this year, St. Agnes is the only school they are going into, they are trying to get to as many of the UCC feeder elementary schools involved as possible.

“We’ve got just about all of the feeder schools that are going to do some type of Hour of Code this year, which is pretty exciting to say that almost all of our schools are getting involved,” the teacher explained.

This year with just one Grade 10 class of computer science students, she said the entire class took part in teaching the Hour of Code to all the classes at St. Agnes at the same time. If she has senior classes, she said it is easier to spread the students out more in the schools.

Torrance herself said she has been taking Hour of Code into the feeder schools for five years, but said UCC was involved before that.

“The kids love it. I’ve had other friends and colleagues that have kids in the classes we worked in come home and say, ‘Mom, Dad, this is what we did today,’ and pull out their tablet or computer to show them at home,” Torrance noted. “The feedback has been really good. My classes love doing it too. They’ve always been really responsive and enjoyed the experience of being able to go out and share their knowledge with other kids.”

Grade 3-4 teacher at St. Agnes Rick Coristine had four UCC students in class leading the kids through the coding demonstration on their Chrome books, and said the experience is a good one for his students.

“This gives the students exposure to UCC which is great because we are a feeder school, and it’s something different for them,” Coristine said. “Just seeing that they’re using Minecraft; that’s something that is really popular with the kids, so this is going to be very engaging for them.”

“Most of us try to integrate the computer in our curriculum but just to throw code in there, you need some computer science background to be able to teach it,” he added. 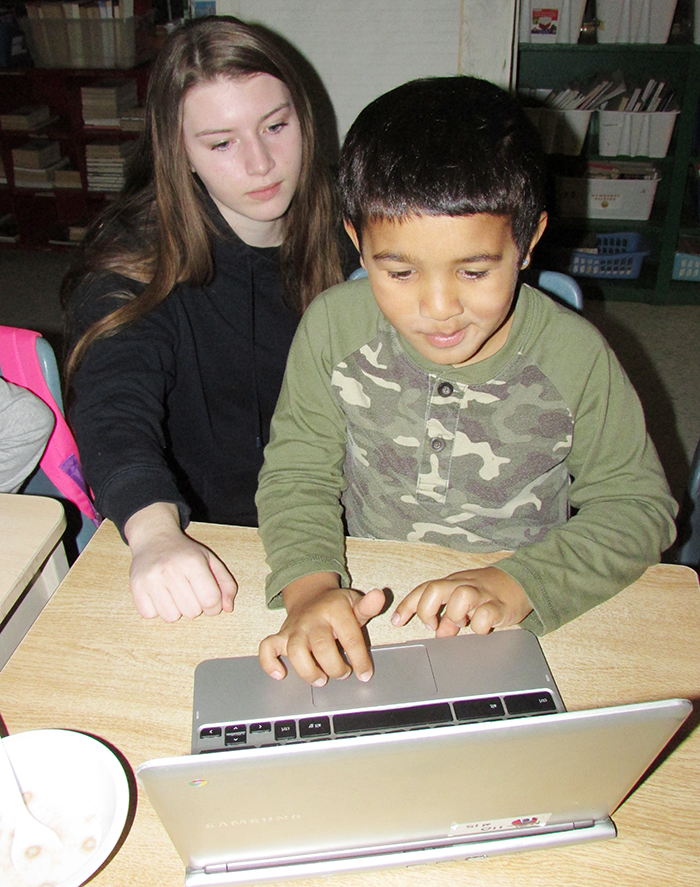