Members of Water Wells First (WWF) aren’t giving up on their demand that the Ontario government do what is right and stop construction of wind turbines in North Chatham until the cause of wells being clogged with sediment, and what is in the sediment, is investigated fully.

WWF spokesperson Kevin Jakubec met with members and media at the home of David Lusk on Green Valley Line. Lusk is the 14th well owner known to WWF that is now experiencing undissolved sediments polluting his well water after nearby pile driving on Bush Line.

The main problem, Jakubec said, is that the provincial government is offering water tests to impacted well owners in a manner that consistently avoids and prevents testing the actual pollutant – the undissolved sediments – for Kettle Point Black Shale, known to contain heavy metals and toxic materials such as mercury, lead, arsenic and uranium.

Jakubec said during the North Kent Wind Environmental Review Tribunal last fall, “WWF provided credible evidence that Black Shale was found in a water well polluted in a similar manner in former Dover township to the MOECC (Ministry of the Environment and Climate Change) and Chatham-Kent Municipality.

They also don’t believe Medial Officer of Health, Dr. David Colby, who told WWF members at a meeting in Pain Court that ingesting the particulate, while unappealing, would not pose a health risk because the particles would pass through the body. WWF, however, has determined that the way to test the shale particles to assess what is in them is the acid digestion test, which releases the toxic materials from the particle.

Lusk said his water stopped running while he was in the middle of a shower, less than a week after pile driving began on nearby Bush line. He noted he did get a water tank from the company, but is concerned with cold weather coming.

“The water in the tank was frozen on top this morning and with cold weather coming, it is definitely going to freeze. What do we do then? The water smells like plastic and I’m not drinking that,” Lusk said.

He added that he currently has to carry water back and forth to the chicken coop so he can get water to the birds, and the stress of the situation is getting to him.

“It was bad enough watching it happen to my neighbours and I got involved with WWF back when this started. Now it is happening to me and this land is my daughter’s legacy, like my dad handed it down to me,” Lusk said. “If we don’t have water, it’s worth nothing.”

Bill Clarke, a local hydrogeologist experienced in local well construction, was at Lusk’s farm for the press conference.

“The most noticeable change was from the Dover area, those were the group of wells that I participated in the early stages, just to see the obvious visual that there were particulates coming into the pressure tanks and then were visible in sinks and toilet tanks. This was unexplainable and from a geological point of view, when I asked about the age of the wells, many were multi-generational and then there was this change,” Clarke said.

He said the people in Dover started to put together questions but “we didn’t have the data. How do you understand how the engine runs if you don’t even know the nature of the engine?”

Clarke said he and WWF are trying to figure it out and it’s taking time, but said they are getting no guidance from the MOECC so they have to use “knowledge, experience and a lot of common sense” to know what they are collecting and do it in a way that is not financially overwhelming for well owners.

“It’s difficult to know who is going to be affected so it’s in this broad reach for anyone who can possibly afford to put $2,000 toward water samples,” Clarke said. “Why would they? Why should they? Who is doing this? Who should be doing this?”

He said they are fortunate there are some great people participating who said “let’s get the background data,” and “we have an absolutely stunning background data set right now and can refer to it, but what’s become apparent that’s showing us a change is this particulate you’ve seen, and that is the focus right now is to see what solids are coming up.”

Clarke said the testing shows clear evidence there is Kettle Point Black Shale coming up and that is a concern.

What also concerns Clarke is lack of action from the MOECC considering what is happening is clearly well interference by clear definition of the Ontario Water Resources Act, Reg. 903.

“It clearly is (well interference) for me. I’ve been doing this for 40 years and I’ve never seen anything like this,” Clarke noted. “For quarries and gravel pits out there, if this was to happen to them, the ramifications would be instant; the corrections, the procedures would just be instant and yet there seems to be reluctance to deny the recognition that people’s wells are experiencing interference from a particulate point of view. The questions that Mr. Jakubec has asked about what are the long-term effects are if this shale has minerology in it that could be detrimental to human health.”

Municipal staff sent out a statement after learning that Jakubec said he believes the health unit and Colby are contravening public health legislation by not investigating well owners concerns about whether or not the water is a health risk.

“The Chatham-Kent Public Health Unit is not contravening any legislation in regard to water quality in the municipality. We take exception to these frivolous accusations.

“In open session Chatham-Kent Council publicly offered to pay for testing of well water as well as sediment. A number of residents have stepped forward to accept the offer and are in the process of having their well water tested. None have indicated interest in sediment testing.

“Despite our repeated requests during the last year, Mr. Jakubec continues to refuse to present evidence to support the health risks he suggests exist.

“The municipality supports Medical Officer of Health Dr. David Colby’s science-based position while at the same time it continues to work with residents of the community to help alleviate their concerns,” the statement from C-K CAO Don Shropshire said.

Clarke has heard the assertions by NKW1 project staff and Dr. Storer Boone that the wells being clogged with sediment is a coincidence and not linked to pile driving, as well as them questioning why only certain wells are having problems.

He said with blasting in quarries he has seen one or two wells go down in the short term through that vibration, but with pile driving, which is ongoing for days at a time, this is a long-term situation.

“The huge concern for North Kent 1 is that once the towers are up and the big blades are rotating, it’s going to be an ongoing vibration and that, in my opinion, is going to cause more wide-spread problems with other wells,” Clarke said. “The trick is, whose well? Some are not going to be affected at all, some will be affected maybe months or years down the way, and some are being affected just by the pile-driving, so we know they are candidates for big-time problems once the towers are operating.”

He said test results are coming in daily and they would be happy to share the results once they get a compilation of information. Scientific studies have shown there are heavy metals in Kettle Point Black Shale which are carcinogenic, but they also show different levels of concentration in samples depending on how they are naturally occurring in the shale. That is why the more samples they collect, the more data they have to get a bigger picture of the spatial variations in the shale and in the aquifer.

“What is the nature and properties of the aquifer and where is the well located. Say we surround a pond and we each throw a pebble in. We start to see these waves taking place, and some waves are reinforcing each other and some are counter balancing each other, and others would be neutral. The same thing is happening under the ground here with vibration – it’s a wave theory that seismologists use all the time to identify ore deposits, water supplies and geological formations, but it’s not simple. It would cost millions of dollars to do the Chatham-Kent area and three to five years of time,” he said. “The mechanism is clear to me. The details of why one well is affected but somebody closer to the pile-driving or tower is not affected – it’s all related to the variations in the stratigraphy, geology underneath that particular land. It’s variations within the geological formations.” 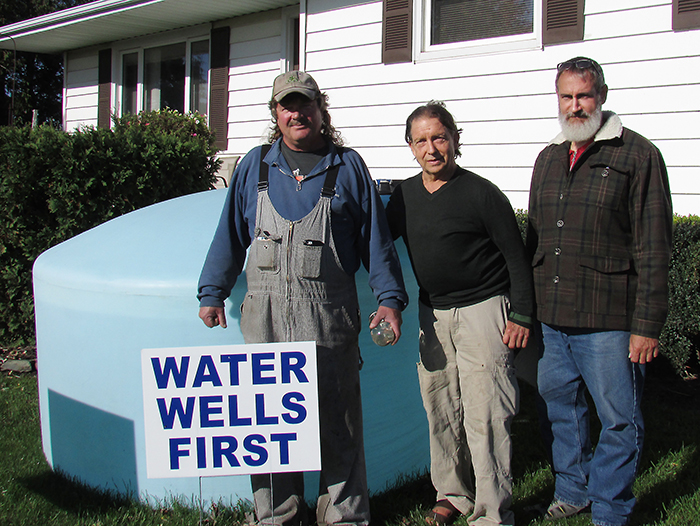