It’s rant time once again. I really need to write these while sitting on our cedar glider rocker bench on the front porch.

For anyone who has watched the baseball playoffs this year, am I the only one who thinks teams should consider switching to plaid Kenora Dinner Jacket-like uniforms? There certainly is no shortage of lumberjack wannabes out on the field sporting massive beards.

Or maybe they turn into hipster coffee baristas in the off-season.

I don’t know how these guys can play through the heat of summer with all that facial hair.

If the players start doing man buns, I may have to stop watching baseball until the trends change.

Look no further than Justin Turner, third basemen for the L.A. Dodgers. Good ball player, but, wow, that’s a lot of hair and beard. With some of the World Series games played in searing Los Angeles heat, I just don’t understand the look.

Form and function are far apart with the fuzzball look here.

Hockey has long had the tradition of playoff beards. That’s cool. Players let their facial hair (or for some of the young guys, the lack of it) grow as they continue to toil through the playoffs.

But then the likes of San Jose Shark Joe Thornton popped up, growing the mega beard and sporting it at all times.

The trend may have sprouted from the San Francisco Giants and their “Fear the Beard” elements earlier this decade. Brian Wilson and other relievers actually dyed their beards black and grew them long.

And speaking of baseball, I cringe whenever I see a ball player wearing his hat a little off centre. Wear it straight! It’s part of the uniform. Arizona Diamondback closer Fernando Rodney has for years had his cap slightly askew. I figured the guy would have straightened it out a long time ago for all the times I ranted at my television for such a wardrobe malfunction. Surely he’s heard me by now.

To the social media photo and video takers out there, you guys are capturing some pretty incredible or funny video clips. But please turn your cell phones sideways before you shoot!

As I’ve said, I’ve seen what might have been some great photos taken, except they are done vertically when a landscape shot would have been the better choice.

And for video, this is a no-brainer. Shoot it sideways, folks. Look at your computer monitors and TVs – video is in landscape mode.

Taking a page out of Jim Blake’s book, I feel it’s time to sound off on drive-thru etiquette, or at times lack there of.

Do you ever notice how when some folks decide they need to go through a drive-thru, nothing is going to stop them, especially common sense, common courtesy, and even the rules of the road.

A number of our local drive-thrus are very popular spots, especially a few Tim Hortons restaurants first thing in the morning. Some patrons just have to get their caffeine boost, or their muffin, and will line up to the point of sitting on the roadway blocking traffic.

People, we have a litany of Timmies in Chatham alone. If you come to one that’s really backed up, why not go to another one nearby? I pass two alone on my way into work each day, and two others are only a short distance away.

Speaking of drive-thrus, I wonder if it’s cellular phone distraction or just tuning out to common courtesy for the folks behind you, but I constantly see lineups where cars leave so much room in front of them that they cause the backlog onto the street, or they just don’t pull forward enough to allow the person behind them to properly place their order.

As a result, the cashier is asking a person’s front tire if they can take their order.

Keep in mind, that driver could badly be in need of his or her morning caffeine jolt, so please do everyone a favour and pull ahead to allow them to order properly.

And what is with the cell phones out in the lineup? I see folks scanning them or texting all the time. Distracted driving on the roadway or in the drive-thru is still distracted driving. Fortunately, given the slow pace through a drive-thru, a text addict isn’t as likely to seriously hurt someone. Instead, they’ll just tick off a crusty middle-aged guy in the truck behind them. 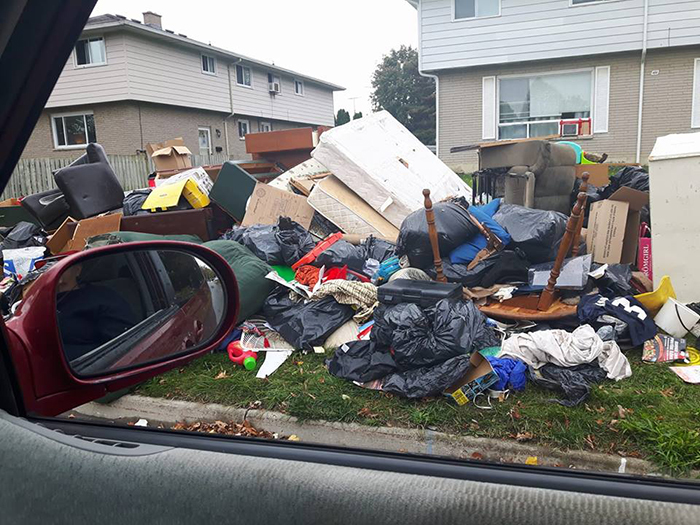 Our municipal waste management folks have done a great job in terms of waste diversion. Kudos to Progressive Waste Solutions for handing out free garbage totes to households across Chatham-Kent. Curbside on garbage day is much cleaner, and crows have slimmer pickings each week, as the trash is mostly in the totes, rather than in easy-to-chew-through garbage bags.

But have you noticed a plethora of furniture tossed to the street these days? It’s one thing to dump a couch to the curb, where it will get tagged and picked up a few days later (note, if you are tossing a big item such as a couch, hold back your garbage tote that week). It’s another when you have the better part of a room shifted to the curb.

I’ve seen that several times. Do you think the sanitation guys will take it ALL away, counting it as three bags of trash, the weekly limit? Each large item counts as a bag of trash for removal purposes. Put out an entire room, and some of it might not be collected for another week.

So, here we are in the fall in C-K. The crows are returning to Chatham to roost and to check out the garbage smorgasbord. They may not have much in the way of snacks, but the way some folks are dumping entire rooms of furniture to the curb, they’ll have a place to chill out and watch hockey.

Now, please excuse me as I retire to the front porch for the evening to scowl at passersby.