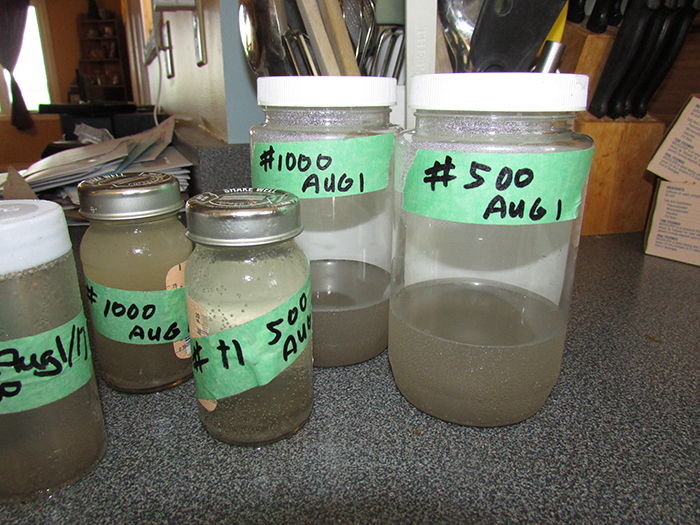 The water well tests taken by Jessica and Paul Brooks, on Brook Line in North Kent, before pile-driving began just north of their home, showed the turbidity (cloudiness) level at an average of 2.7 NTU (Nephelometric Turbidity Units), which the couple showed to media at a press conference at the end of July. That amount is below the Canadian Drinking Water Standard level of 5 NTU.

In a test taken by AECOM in February of 2017 of the Brooks well, the report stated the turbidity value as 6.2 NTU, as reported in technical memorandum to Chatham-Kent council on Aug. 9. AECOM was contracted by the North Kent Wind Farm company to do base-line testing on wells in the project area. Tests taken by AECOM and the Ministry of the Environment and Climate Change (MOECC) after the complaint by the Brooks that their well was clogged with sediment after pile driving began, however, differ in their amounts.

In the Aug. 9 technical memorandum, which makes no mention of the Brooks baseline testing results, AECOM reported the turbidity after pile driving to be 57.3 NTU, and the MOECC results at 86.8 NTU.

When the MOEE was asked about the discrepancy in the results, and the preliminary report from AECOM to council that said the sample taken was “visibly clear,” Mark Smith, area supervisor at the MOECC office in Windsor replied to the Chatham Voice in an e-mail.

“The ministry takes concerns about groundwater quality very seriously. We have taken a cautious, science-based approach when setting standards for renewable energy projects to protect the people of Ontario.

“As part of our oversight, the primary focus of the site visit conducted by the ministry was to determine whether off-site activities, including pile driving, may have caused an increase in turbidity levels in the groundwater supply. The ministry has provided both the company and the resident with the ministry’s preliminary results.”

WWF spokesperson Kevin Jakubec, however, said these comments by Smith were “completely disingenuous.”

“The particles in the water have never been seen before. The aquifer does sit on Kettle Point black shale, which is naturally occurring,” Jakubec noted. “Whether they are man-made or naturally occurring contaminants that are not normally seen obligates the MOECC to investigate. There is Supreme Court case law on this. They refuse to collect and analyse the sediment clogging the wells; they refuse to tell well owners who are begging them for answers if these sediments are safe. The MOECC does not answer questions and that is a clear violation of Sec. 15 of the Ontario Environmental Protection Act.”

The Kettle Point black shale is known to contain heavy metals such as lead, mercury and arsenic, as former minister Glenn Murray admitted in a letter to Mayor Randy Hope on May 18.

Jakubec said tests results his group has recently received on a water sample from a contaminated well in the Mitchell’s Bay area, conducted with a standing electron microscope, show that in one water sample, 52 per cent of the particles in the sample were under one micron in size, unable to be seen with the naked eye. His concern is for the people ingesting and bathing in the water, which looks clear when filtered, is that it still contains black shale particles. Most filtration systems available to the public can only filter down to one micron, he said, meaning particles can still get into the water supply.

The statement from Smith said that under the REA permit for North Kent Wind, the company must send an assessment of the complaint to the ministry and that assessment is currently under review by ministry technical staff.

At press time, council was expected to put forward a motion at Monday night’s council meeting, asking the MOECC to investigate the well water concerns immediately.