Ontario Premier Kathleen Wynne made a stop in Chatham Thursday on a rare visit through Southwestern Ontario, touring the Chatham-Kent Museum and Simply Green greenhouses.

Arriving at the museum, Wynne took the time to speak to representatives from protest groups, including Water Wells First spokesperson Kevin Jakubec, who asked her to look into why the Ministry of the Environment was not taking sediment samples while taking water samples from contaminated wells in Dover.

“I know we have taken the water samples and are waiting for the results,” Wynne told Jakubec. “I will ask about the sediment. Let’s get the results and that information first and make sure we know what is in that water and get that fixed.”

Jakubec was pleased with the opportunity to talk face-to-face with Wynne, but has many other questions that have not been answered by ministry officials.

He said MOECC officials finally responded to WWF concerns by sending the senior hydrogeologist for Southwestern Ontario from the ministry’s London offices out to the homes of Theresa Pumfrey, Christine Burke and Marc St. Pierre, each of whom have significant black water contamination.

Jakubec also said Water Wells First has asked the MOECC what are the scientific reasons for not collecting and analyzing the sediments, but has had no response from the ministry.

“Water Wells First can only conclude that the Ministry of the Environment and Climate Change is not conducting an honest investigation; that the ministry’s refusal to collect and analyze contaminating sediments is a serious breach of duty and negligence to uphold the Ontario Environmental Protection Act,” he added.

Wynne, when talking to Jakubec, said that the ministry has strict regulations and she has to assume that they will be following those regulations when assessing the water samples taken from the wells in Dover.

While the ministry even taking water samples is a step forward, Jakubec said $230,000 to date has been paid by well owners to investigate the cause of the black water and to acquire private baseline tests that meet the legal chain of custody requirements for litigation should it become needed.

“The need for a public inquiry should be evident now for everyone in our community when the Ministry of the Environment and Climate Change refuses to collect evidence and refuses to disclose data for outside independent review.”

Water Wells First also learned from the MOECC last week all charges against North Kent Wind have been dropped by the MOECC legal branch for construction of a control tower without the REA Permit.

Jakubec said the explanation provided to Water Wells First by MOECC staff was that the Ministry of Environment does not consider the meteorological control tower that was pile driven a “permanent structure.”

“This defies common sense. The tower is 100 metres high and is secured permanently by steel beams anchored deep into the bedrock. The steel piles cannot be removed. The foundation is permanent,” Jakubec noted.

“Will Premier Wynne call for a public inquiry into why the Ministry of Environment and Climate Change at every opportunity to collect evidence of groundwater contamination in Chatham-Kent refuses to do so? It has been brought to the attention of the MOECC for nearly a year now, the serious degradation of groundwater quality in Dover township and the presence of black shale particles in the affected wells.” 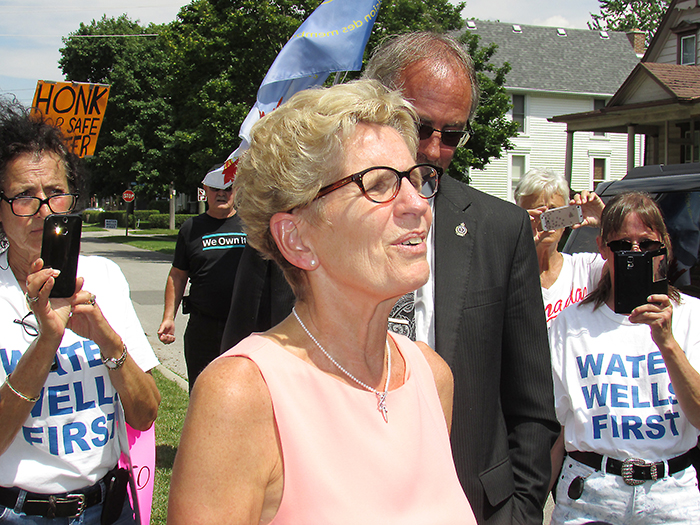