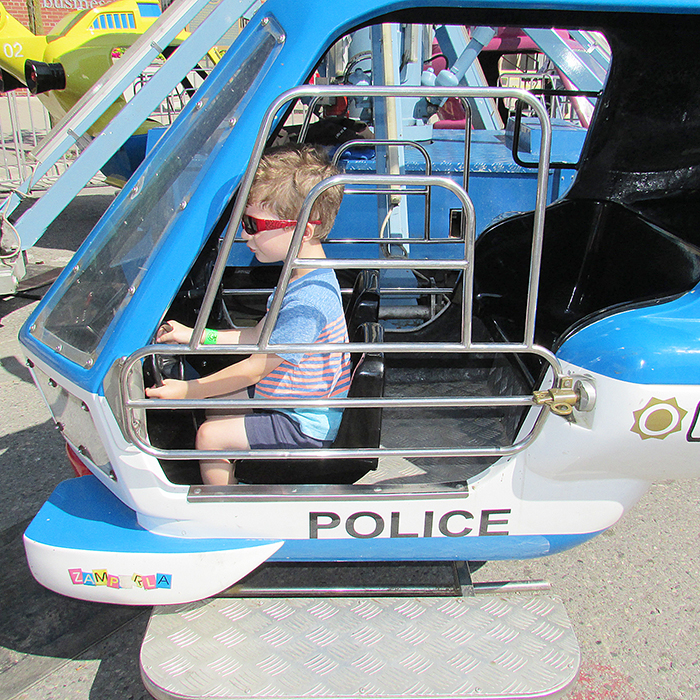 Blenheim is ready for its annual weekend outdoor party!

He said the pit spitting element of Cherry Fest dates back to 1982 when it was initially held in Cedar Springs. It moved into Blenheim and mated with Sidewalk Days, filling the downtown with deals, food, activities and entertainment.

The downtown is closed to vehicular traffic throughout the festival, as midway rides and booths occupy the heart of Blenheim, drawing in thousands of people.

“Thousands and thousands of people,” Huggins stressed. “But a huge part is the weather. We can do all the planning we want, but if it’s blistering hot or raining heavily, it can affect Cherry Fest. Still, we’ve had times when it has rained all day and people have still been all over the downtown.”

“I remember coming up here when I was dating my wife, with her family and her little brothers. I have lots of good memories with Cherry Fest,” he said. “I want to keep that going with my kids and other people’s kids.”

Given the name, Cherry Fest has a great deal to do with cherries. The Blenheim Youth Centre runs Cherry Central, a food and beverage booth in the middle of the downtown. Volunteers will sell fresh sweet cherries from Delhaven Orchards, a longtime supporter of the event.

“They also provide the cherries for pit spitting,” Huggins said of Delhaven. “People don’t realize how fortunate we are to have the fresh fruits and vegetables so close by.”

Cherry Central is also known for the interesting flavoured pop it sells. Huggins said getting that pop, which typically isn’t sold around Chatham-Kent, can involve someone making a trip into the U.S., sometimes quite a distance.

Another food option is Smokin’ Aces, an amateur smoking competitor that will be doing cherry glazed ribs and other special cherry treats.

The kids spit it out first, followed by the annual celebrity event, and then the serious competitors in the men’s and women’s open classes take to the street.

“People come out for fun, but in years past, people have come from Perth County, Niagara, Sarnia and even Michigan to take part,” Huggins said.

The pit spitting is certainly not the only thing going on over the weekend. he said. Dance, gymnastics, fitness and martial arts groups will put on demonstrations, and there will be live entertainment throughout the weekend, including Cherry-oke.

“It gets more and more popular every year. This year, it’s two-and-a-half hours,” he said. “Every time you sing a song, you put a ballot in the box.”

The top prize is $100, and given the lottery format, anyone can win.

That takes place Friday right after the pie eating contest, a no-hands affair that draws a crowd.

With all of that there is also the midway, put on by World’s Finest Midway.

“They were brought in new last year,” Huggins said of the operator. “We got a ton of compliments. They had eight rides last year, and this year we hope to have more.”