After 30 years of taking tips on crime, Chatham-Kent Crime Stoppers is close to surpassing the $100 million mark in drugs seized and property recovered.

At its annual meeting recently, Crime Stoppers police co-ordinator Dave Bakker said without the partnerships the group has with local police agencies, media outlets and community organizations, Crime Stoppers would not be as successful as it has been over the past 30 years.

“Surpassing $100 million – that is quite an accomplishment for a small program like ours,” Bakker said.

“This is our 30th year and what we have achieved is something to be very proud of – 30 years of success. Working together is what makes this program a success,” Shreve said at the meeting.

Bakker said the advent of social media has been a huge help to Crime Stoppers as well, with media outlets posting pictures and descriptions of crimes or Crime of the Week.

“With social media, when a picture is posted to a site and we ask for help, some criminals have been identified within 24 hours,” Bakker said. “The community response has been unbelievable.”

Running the ID clinics for parents has been very successful as well, Bakker said of the partnership with the Masons. The fingerprints and photos are stored on a USB stick for parents to use in the event their child goes missing. Bakker said that program also extends to families of seniors who have dementia and may tend to wander.

A play involving high school students on fraud and scams was very well received as well, Bakker said. The program ended once the first semester ended, but Bakker said they are still getting requests, as the play was a “very effective way to get the message across.” He said they may do something again this fall with the schools.

Two inspectors from the Ontario Ministry of Finance were also on hand at the meeting to explain their role in reducing the amount of smoking in Ontario as well as the amount of contraband tobacco, both in retail outlets and coming from fields where tobacco is processed.

The Canadian Taxpayers Federation estimates there is up to $1.1 billion per year in lost revenue due to contraband tobacco. The underground economy in the sale of tobacco products is hurting the economy and the Ministry of Finance investigation branch is working with Crime Stoppers across Ontario to work on the problem, accepting tips on the illegal sale of tobacco. 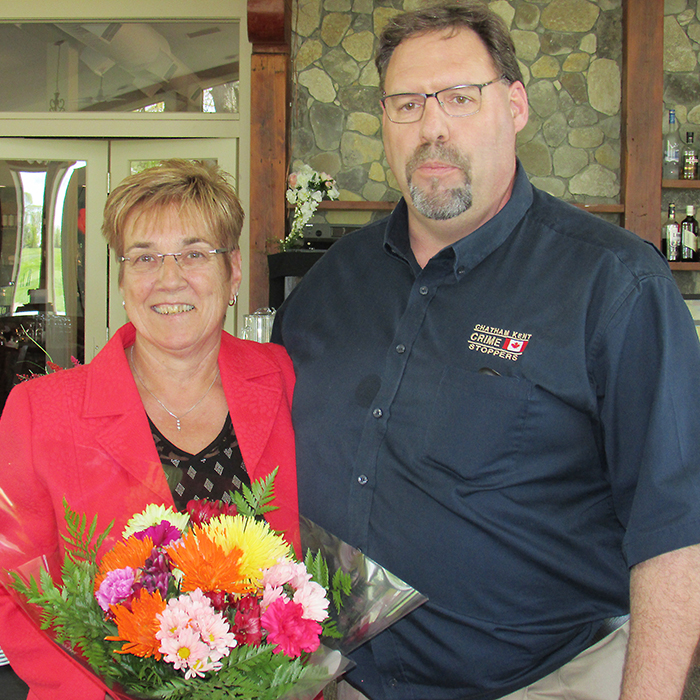