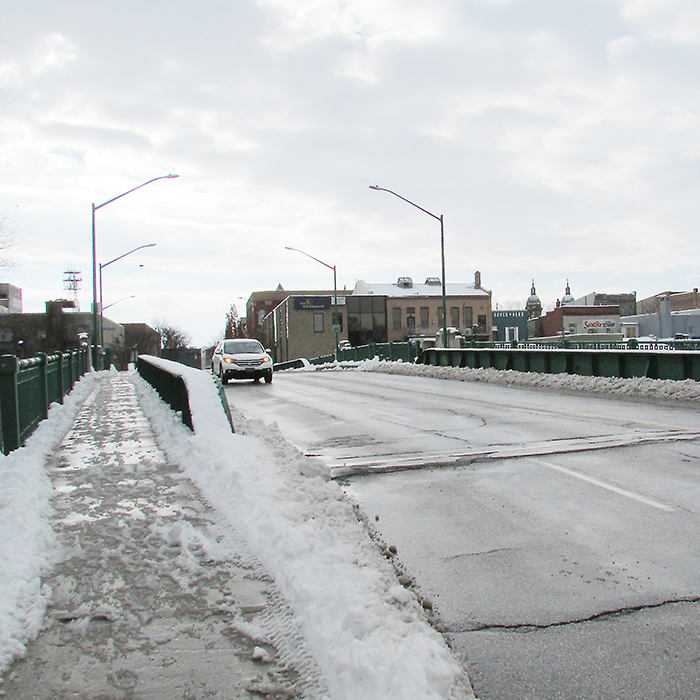 About a dozen local residents heard firsthand the list of four options on what to do to improve the Fifth Street Bridge in Chatham.

The recommended option from Dillon Consulting is to tear off the top of the bridge and only rebuild that element.

Adam Sullo, director of engineering for the municipality, said the consulting firm presented four options. The first is to do nothing, the second is to rehabilitate the bridge in a similar manner as the Parry Bridge on Keil Drive this past summer. He said that option would be relatively expensive for limited payback.

The fourth option would be a full bridge replacement, with a price tag of an estimated $9.5 million, Sullo said, “not cheap.”

That leaves the third option – replacing the bridge surface, but reusing the foundation.

“We’d reuse the abutments on both sides of the bridge. The two centre piers would be taken down to just below the water line,” Sullo said. “It would be a fixed span.”

And it would come with an estimated price tag of $6.5 million.

He said all signs point to everything below the water line being stable.

“The foundations on the bridge, we know there hasn’t been any movement. They’re on wood piles,” Sullo said. “Unfortunately we can’t inspect the wood piles, as they are under a concrete pile cap. But we are very confident in the condition of the foundation, as there has been no movement.

“We could almost get another entire life out of the existing foundation, 60-80 years. That’s why we are leaning towards that.”

Timeline on the construction would be to begin just after RetroFest in late May and continue to the end of the year.

Paul Shettel, co-chair of the Historic Downtown Business Improvement Association (BIA), said he prefers the recommended option, as well as the timeline. RetroFest will proceed without any street issues, including the Classic Car Cruise, which will pass over the Fifth Street Bridge.

Construction, however, will impact other downtown summer and fall events, including Canada Day celebrations, RibFest, Downtown in the City Extravaganza and the Santa Claus parade, as parking and traffic patterns will be impacted.

The province is providing $2 million in funding to help with the bridge improvements, but the money comes with a ticking caveat – work must be completed by the end of the year. Sullo said the recommended replacement project will meet that timeline, but a total replacement would not, as he anticipated that would take upwards of a year to complete.

If the municipality proceeds with the recommended option three, the bridge will have the same number of lanes, as Sullo said they must maintain a similar bridge weight. But the second southbound lane would start sooner.

“We’d have a dedicated left-hand turn lane onto King Street,” he said. “That’s the most common move through that intersection.”

The public still has another week or so to provide input on the project, either to the municipal engineering department or to Dillon Consulting. After that, Sullo said municipal staff will compile the feedback and distribute a letter to residents and businesses near the bridge, and likely online. Staff will also finalize the environmental study and present a report to council March 20.