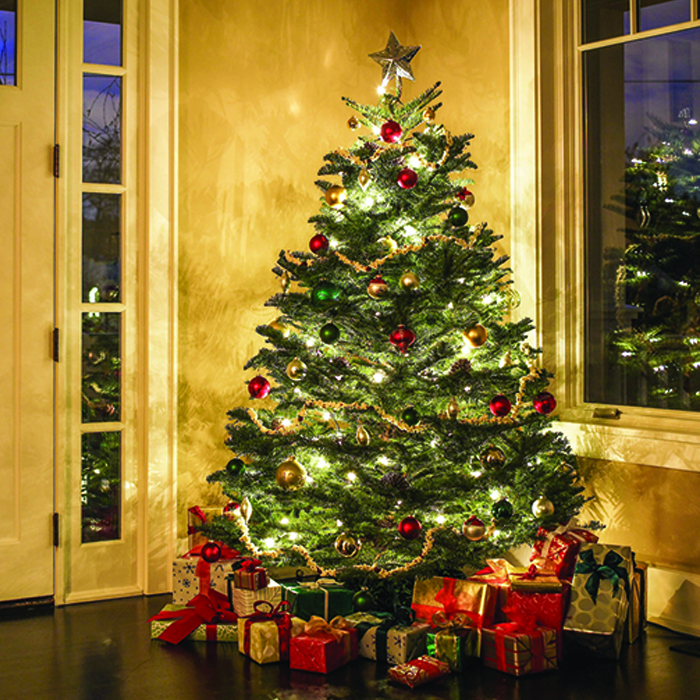 The Corcorans go artificial for once

For the first time in our daughter’s history, we went artificial for our Christmas tree. And I think we’re quite happy with the results.

The previous 13 years, we’ve purchased from the Boy Scouts. Selection, of course, was based on size to fit the desired space. But also smell.

After all, that’s a big selling point for having a real tree in your house for the holidays – the wonderful pine or spruce scent.

This time around, my wife lit a scented candle.

As for the tree selection, I took our daughter with me to look at our options at Canadian Tire. Naturally, I shopped local.

We had to send photos back to Mary Beth for advice – hey, I had input on price range, but wanted the two experts to agree on the tree.

And they made an excellent choice. We are the proud owners of a seven-foot pre-lit tree that was very easy to put up, as it came in sections and the branches all hinge into place.

I recall older artificial trees where you had to install each and every branch. They also looked, well, artificial. This tree looks so much better.

So, with the Oakland Raiders-Buffalo Bills football game on mute, and a selection of Christmas tunes blaring from Brenna’s Bluetooth speaker, we decorated the tree.

I missed enough of the game action to not get too discouraged when the Raiders fell behind by 15 points in the third quarter, but got to see them mount their big comeback.

I also got to listen to the action when Michael Buble ran out of batteries – or at least Brenna’s laptop did, ending the Christmas music.

Despite the fact it was just our family trimming the tree, we weren’t alone shortly thereafter. Brenna FaceTimed one of her friends who is recovering from an illness. After nearly a week in the hospital, her girl pal came home late last week and is still working to get her energy back. I’m told she’s even more gaga over Christmas than Brenna is, but I find that hard to believe.

So our kid connects with her buddy, and then proceeds to walk around the living room, holding up her phone and showing all the decorations, and the tree. Our efforts met with a thumbs up from Brenna’s buddy, as well as her mother.

I never cease to be amazed at how technology is changing our lives. In the past, you’d be on the home phone telling friends about goings on, but now, FaceTime and Skype allow face-to-face conversations, regardless of each other’s whereabouts.

And what better way to use that technology than for Christmas conversations?

Scientists may have debunked the longtime myth that cold weather won’t make you sick, but I caught a chill Saturday, and as I write this column, I have a full-blown cold.

Full blown, as in blowing my nose and hacking up a lung.

I believe it started Saturday. I went outside mid-afternoon to bag leaves and clean out the hot tub.

Draining, cleaning and refilling the hot tub is a long effort. You have to cycle a degreaser through the system for two hours before you can start the drainage procedure.

So as that cycled, I bagged leaves.

When I do yard work, I get lost in my thoughts and become rather oblivious to my surroundings except for the task at hand. So when my brother-in-law Tom walked up to me in the backyard, I jumped about four feet in the air. I wouldn’t be surprised if I let out a rather less-than-masculine yelp as well.

Good for a lot of giggles. Thanks, Tom.

When it came time to drain the hot tub, I used a very cool siphon tool that came with the tub when we bought it used several years ago. It is essentially just a four-foot-long tube of clear plastic with about 10 feet of flexible hose attached. You work the tube up and down to force water up it until you get the suction going and it drains the tub in about 20 minutes.

You can use it as a water vacuum to suck up any particles in the bottom of the hot tub, or on the seats.

Cleaning the tub as it drains is easy. Ditto for filling it back up. But that takes a good 40 minutes or so to refill.

And that is when I caught my chill. I should mention that as I sat outside waiting for the tub to fill, my intelligent wife warned me to stay warm. My response? Grab a beer from the fridge outside, sit down and check my cell phone.

The beer had to sit for a bit, as it was slushy. I added another layer of clothing, but my thin pair of deck shoes let the cold creep in via my feet. I didn’t bother wearing gloves either.

But as soon as I added the chemicals and put away the hose, I retreated indoors and wrapped up in a blanket. Finally, my feet warmed up hours later.

And the next morning, I woke with a persistent cough.

I credit Mary Beth for not using “I told you so” on me this time around. I guess she could drop those four words on me almost daily, really.

So I sit here, wheezing (asthma and chest colds do not mix well), coughing and exhausted. But I am trying not to revert to the classic Big Baby routine that can take over men when they get sick. It seems women can fight through all sorts of ailments with hardly a whiny word. But guys tend to behave as if we are on our deathbed when we are down with a cold.

I will ask nicely for some hot chocolate here and there, and a blanket or a glass of water when she’s up, but hopefully that’s about it.

The wheezing might chase her to another room, however.