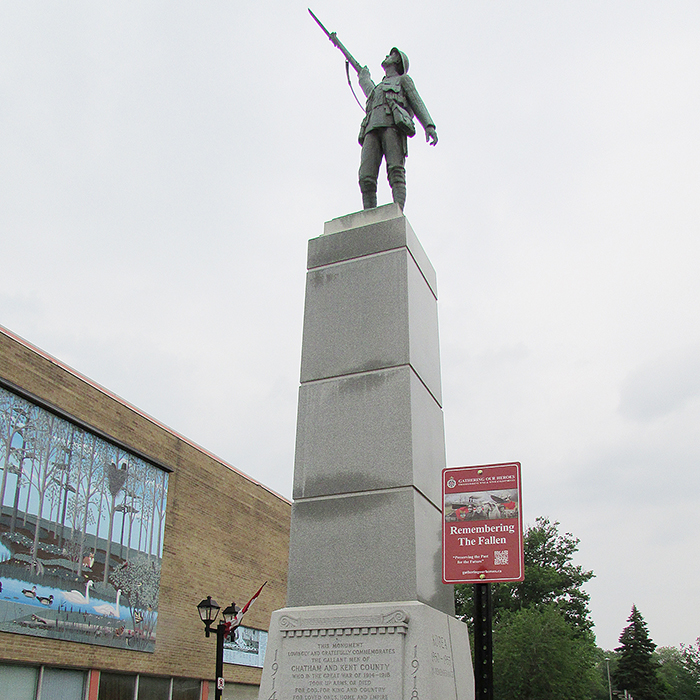 Confusion over whether the British “Tommy” atop the Chatham Cenotaph should be cleaned has a Chatham historian and cenotaph expert concerned the municipality may be ignoring the advice of experts.

Jerry Hind said a proposal sent to the municipal heritage advisory committee suggested the statue be hand cleaned and buffed to “remove most weathering and greening.”

Hind, who has studied the Cenotaph’s history for a decade and who has authored a three-part series on it, said he was shocked.

“The statue is bronze – it’s supposed to be green,” Hind said. “The weathered patina is what provides a historical look to the statue. Look at the Parliament Building in Ottawa. Is anyone cleaning the green off of it?”

He was so concerned that he contacted the Canadian Conservation Institute in Ottawa.

In her reply to Hind, Lyndsie Selwyn, a Senior Conservation Scientist with the CCI said “conservators rarely try to restore a corroded outdoor bronze by making it look new again. Instead, they conserve the corroded bronze, keeping as much of its evidence of age and history as possible.”

Chatham councillor Michael Bondy said last week the municipality was awarded a grant for work on the 93-year-old monument after a misspelling of the word “remembrance” came to the attention of the federal Veterans Affairs department last November.

“I just got a call out of the blue and we were encouraged to apply for a grant,” he said. “I turned it over to administration and we’re getting some money.”

Bondy said the exact amount of the matching grant is confidential since the work will be publicly tendered.

Before the municipality learned of the grant, Bondy said two local businesses, Smyth Memorials and Scribendi had stepped forward to cover repair of the spelling mistake.

“That means we have more money for cleaning and repointing as well as any other work that needs to be done,” he said.

“Part of the original plan included the idea of cleaning the bronze statue on top of the Cenotaph, but thanks to Jerry Hind, we won’t be proceeding with that,” Bondy told the Voice Friday.

“Jerry was absolutely right,” Bondy said. “I really appreciate him bringing that to the attention of myself and administration. We won’t be doing any work of that sort.”

A subsequent e-mail from Jeff Bray, Chatham-Kent Parks Manager to Hind contradicted Bondy. Bray wrote, in part, “the statue will be cleaned in accordance with the Canadian Conservation Institute’s guidelines.”

“There is a world of difference between saying you’re going to adhere to some standards and actually having a registered conservator look at the statue. This is no place for amateurs.”

“I was told by the CCI there is one conservator in this part of the province and that person is in Toronto,” he said. “The statue alone cost in the neighbourhood of $5,000 in 1923 so its value now would be approaching six figures. In a practical sense, it’s priceless.”

Hind said he became interested in the Cenotaph in 2007 when he was considering the idea that the municipality could add the names of the “First World War” guys who had been missed.

He later became curator of the Gathering our Heroes project commemorating Chatham and Kent County veterans.

“The statue was made in three pieces by a Toronto company called Pickle and Sons,” he said. “The arms and rifle are separate. I don’t see the need to remove almost a century of protection and there is no way we should even consider it without an expert.”

As for correcting the spelling of the word remembrance on the section of the cenotaph honouring Korean War veterans, Hind said he isn’t in favour of the move since the word shouldn’t even be on that section of the monument.

“It’s a mistake that the word is there,” he said “Military protocol states that the word should be used once, at the front of a cenotaph and not duplicated anywhere else so as not to elevate the sacrifice of one group of veterans over another. We’re just replacing one mistake with another.”