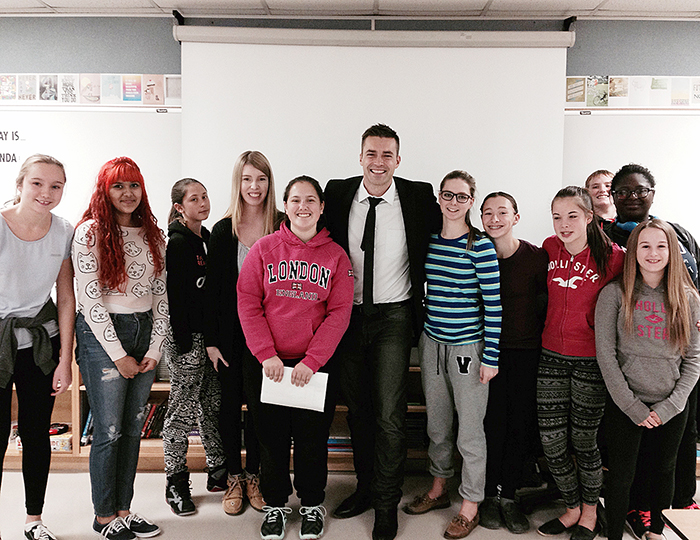 They may not be of voting age yet, but Grade 12 students at CKSS researched party platforms and candidates and came up with their own winner for the recent federal election.

The students in Stephanie Kennedy’s social justice class did their homework by looking into the local candidates and their party’s priorities and voted in favour of Chatham-Kent-Leamington NDP candidate Tony Walsh.

“Tony Walsh may not have won the election in Chatham-Kent but he won in overwhelming margins in Room 207,” Kennedy explained. “My students are incredibly well-informed when it comes to our community, province and country’s political climate. Most will be 18 in six months or less, so it’s interesting to see where their priorities lie and the kind of change that might bring to our community in the future.”

What makes it a great story is that Kennedy ran into Walsh in the grocery store after the election and told him 93 per cent of her class voted for him in their mock election. After chatting, Walsh offered to come and talk to her class and offer his assistance with the planning for their action projects.

Kennedy said the students decided to surprise the candidate with a “victory party” Oct. 29 in honour of his victory in their class.

“He was graciously coming in to work with my social justice class and we surprised him with a celebration, as if it were a real election win. We had an orange NDP cake, a certificate informing him that he had won the riding of Room 207 at CKSS and ‘You’re # 1 (at least at CKSS)’ balloons,” Kennedy said. “It was a very cute morning and my students were so excited to see that people in positions of power are willing to listen to them and work with them.”

For Walsh, the experience was a positive one and falls in line with his side business of volunteer consulting for non-profit and charitable organizations and his work with Junior Achievement.

“I talked in a lot of classrooms during the campaign and just because it’s over doesn’t mean I’ll stop visiting classrooms,” Walsh said. “Stephanie said her class was a social justice class who were very engaged, just this October collecting 100s of cans for the food bank.”

The candidate jumped right in to help the Gr. 12 students with their action projects, tackling issues such as the Syrian refugee crisis, poverty in Chatham-Kent, the new sex education curriculum and mental health.

“I worked with the groups, listening to their pitch and helping them with next steps and it was a very positive experience,” Walsh explained. “These are our future political leaders in the community and it’s important we engage and empower them.”

“These are Gr. 12s and she has them so engaged, even at 9 a.m. in the morning,” he joked. “They’re so bright and are like sponges, they soak up everything and are so concerned about the environment, the most vulnerable in our community and refugees. It really inspires me to help them to do more.”

The cake and celebration was a surprise to Walsh who said he was very humbled by the fact they voted for him. He plans on working with the class in the future, and also paid a visit to Kennedy’s Gr. 9 English class while at the school.

Kennedy was very happy Walsh gave his time and the benefit of his experience to her class.

“As a teacher, I want my students to understand that they have this incredible capacity to create positive change in our world. It was wonderful to have someone like Tony be willing to come in and really listen and work with them,” Kennedy said. “He has made their learning much more authentic and inspired by validating their projects and coming up with a plan to roll them out. The passion these students have for our community is incredible and it’s so important to nourish their potential.”