A local greenhouse company has its eyes on expansion and living up to its name.

Truly Green, recognized Thursday as the Chatham-Kent Chamber of Commerce’s industry of the month, is gunning for carbon neutrality, while seeking to eventually quadruple in size.

The greenhouse, situated on Bloomfield Road across from Greenfield Specialty Alcohols, currently has 22.5 acres of tomatoes. A second phase will double that acreage to 45, while Truly Green’s three owners wish to double that number again.

Phase 2 is slated to be completed by the end of the year. And its owners plan to more than double staff in the process. Truly Green employs 55 people, a mix of local personnel and migrant workers, and plans to add another 80 or so when Phase 2 is complete.

Hilco Tamminga, who along with partners Greg Devries and Phil Bultje oversee the operation, said the plan is to continue to produce just tomatoes at the greenhouse, but the focus will be on smaller varieties of tomatoes, which require more labour to maintain and harvest.

Tamminga said labour is the heart and soul of Truly Green.

“You can borrow money and build something, but it’s the people who make the business,” he said. “Culture is huge.”

Truly Green holds regular company events to thank the staff for their efforts.

Rob Brown of the chamber of commerce, commended Truly Green for its efforts in Chatham-Kent.

“It’s businesses like this that exemplify Chatham-Kent,” he said. “And it’s the people who make it.”

Chatham Coun. Darrin Canniff, representing the municipality at the gathering, said Truly Green is a very active corporation in the community, supporting a number of local causes.

Tamminga said the company is proud to be part of the Chatham-Kent landscape.

“And it’s cool that all three partners are local folks,” he said. “It truly is a privilege to be part of the Chatham-Kent community.”

Truly Green is hoping to have a carbon neutral way to produce its tomatoes. In partnering with Greenfield across the street, it has the means to accomplish that goal.

Currently, carbon dioxide emissions from the plant are piped under Bloomfield Road to feed the tomato plants. Next up is to take advantage of excess heat from the corn distillation process at Greenfield.

Tamminga said by the middle of 2016, the waste heat will be pumped into the heating system at Truly Green, reducing energy needs at the facility, and cutting its carbon footprint.

The heating on site right now is done by a boiler system. The carbon dioxide generated in the heating process also goes to plant growth.

“We grab CO2 from our boilers and can use that energy at night,” Tamminga said. “We can use Greenfield CO2 as well.”

That all changes in the next year.

“We’ll gain that heat transfer as well. We can put in as much CO2 as we need and not worry about being frugal with our energy,” he said.

Energy and labour cost management are crucial for the success of the facility, Tamminga added.

“We have to be able to mitigate our energy use and exposure.”

When the heat and carbon dioxide transfer is running and all expansion is complete, Tamminga estimates it will be able to reduce CO2 emissions to the tune of 16,000 tons a year.

The abundance of carbon dioxide coming from Greenfield is what spurred Tamminga, Devries and Bultje to grow tomatoes in their greenhouse in the first place. Many other greenhouse operations in Chatham-Kent instead opt for peppers. But Tamminga said tomatoes are the highest carbon dioxide users among the three typical greenhouse crops – peppers, tomatoes and cucumbers. 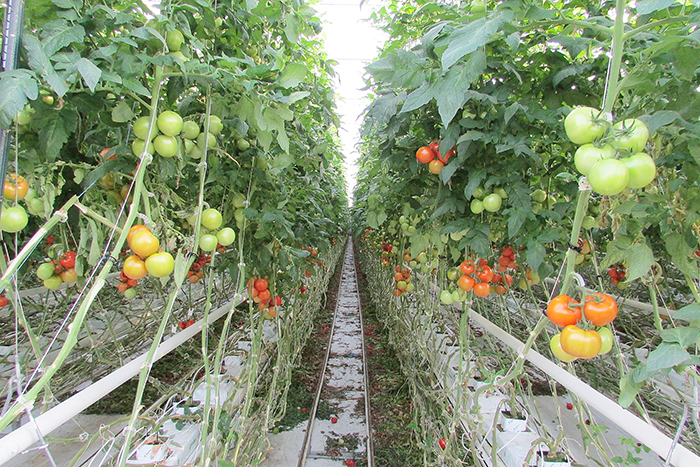