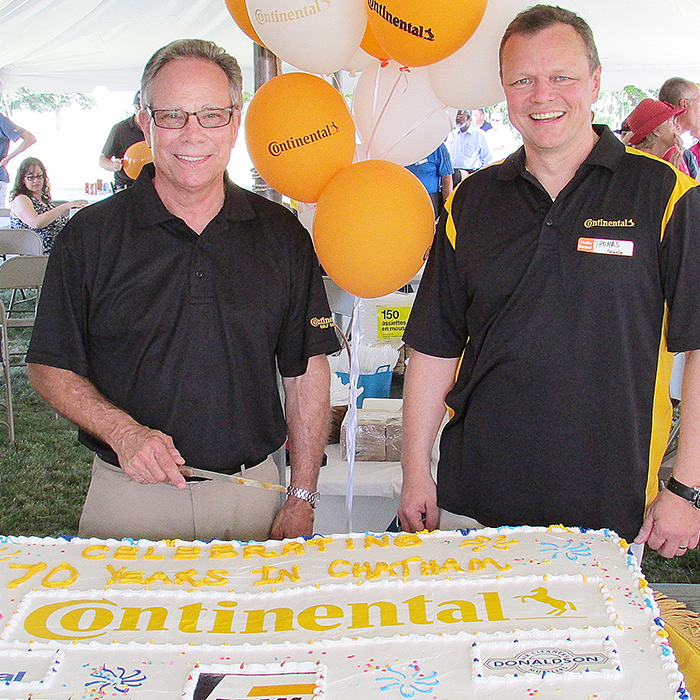 Classic cars, cake and public tours were all part of the 70th Anniversary celebration of Continental Tires in Chatham on Saturday at the Park Street East facility. Employees, the public and local dignitaries were on hand to join in the celebration as Bill Gillier, director of actuators, left, and Thomas Stierle, vice-president of actuators from Germany cut the cake before beginning tours of the facility. (Mary Beth Corcoran photo)

If you drive a vehicle, there is a pretty good chance it has a part that originated at Chatham’s Continental Tire.

It won’t be what you think it is, however.

Instead, it’s a leading site for design and testing in many of the parts that make your vehicles run cleaner and more efficiently.

In other words, it’s what’s under the hood that counts.

The Park Avenue business celebrated its 70th anniversary party Saturday by treating its staff to lunch, a car show and tour for families and friends.

Facilities Director Bill Gillier said he is proud of the highly trained team of 135 engineers and other staff who design sensors and actuators.

The Chatham facility is part of the Continental Corporation, a global giant in the automotive industry with operations in North and South America, Europe, Africa, Australia and Asia.

The Chatham site evolved from a production facility to design and testing. On any given day, customers from around the world will be in Chatham discussing projects.

“Our customers come to us and we design and test sensors and actuators to make sure they meet standards of operation under all kinds of weather conditions and governmental regulations,” he said. “Once we’ve got what the customer wants, we take the products and help set up production in whichever of our facilities is best suited for that.”

With some 300 patents to their credit, staff at the Chatham location are justifiably proud of their work.

“We have a talented staff and it’s a great place to work if you like to be in at the very beginning of a product and see it through,” he said. 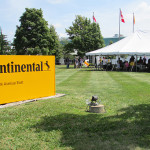 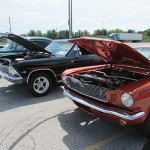 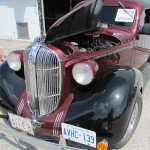 One Response to Continental marks 70 years in Chatham

« Boss of the bass Gala marks 10 years for organization »