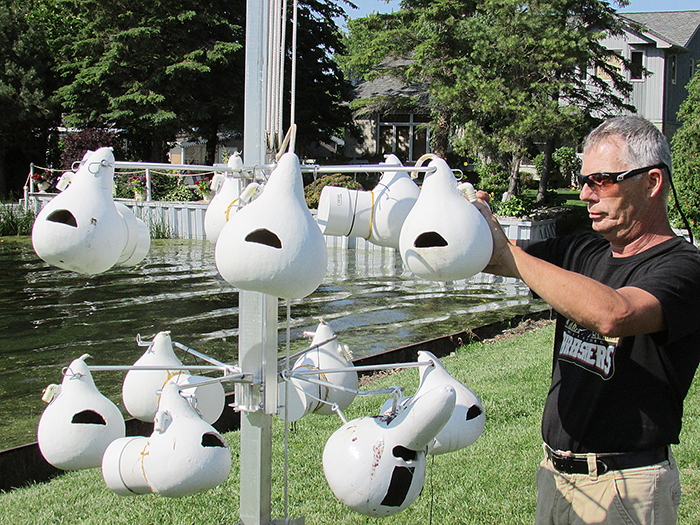 Listening to a conversation between Richard Carr, Dave Smith and Susan Carr, you might get the idea they’re into some Medieval video game or secret project.

Terms such as castle, landlord, T14, geolocator and 8051-55387 roll off their tongues as easily as most people talk about the weather.

Although they are involved in a project, it’s anything but secret.

The three are part of a growing movement to help reverse the decline of North America’s purple martin population that has decreased by as much as 40%.

The Carrs are founders of the Walpole Island Purple Martin Project, while Smith has introduced the birds to the Mitchell’s Bay area.

Castle and T14s are terms for martin houses, a landlord is someone who has a colony of the birds on their property, and geolocators are the latest technology in tracking the birds as they migrate each year.

It’s the band number of a martin that has been migrating between Walpole Island and Brazil for each of the past four years.

In that time, the bird (which weighs less than two ounces) has travelled more than 64,000 kilometers, and not only does it return to the same area, it returns to the same apartment in the same complex each year.

The Carrs started the project in 2009 when they erected a martin house at a neighbour’s home with the idea that the birds would decrease the mosquito population.

“We learned that mosquitos are only about 2% of a purple martin’s diet,” Susan said, “but by that time we were hooked.

“Purple martins eat on the fly,” Susan said. “Since they’re out during the day and mosquitoes are active at dusk, they aren’t really out at the same time that much. Mostly, they eat insects such as dragonflies.”

The mosquito myth notwithstanding, there are plenty of reasons to like the birds.

Native North Americans knew that the birds would eat insects that gathered around drying hides and food, and they made noise whenever visitors came around a village.

“Children loved to watch them flying about and they were like a warning system for intruders,” Susan said. “The tradition of putting up gourds for the birds to nest in started a long time ago and continues today.”

Smith, president of the Sydenham Field Naturalists, learned about the project and enlisted Richard’s help. This year he erected two martin nest sites at Mitchell’s Bay and has been rewarded with five birds hatched and five eggs waiting.

“That’s great,” Richard said with mock jealously when told of the Mitchell’s Bay success. “I don’t know what your secret is.”

Richard is federally certified to band martins, and performs the task on about 200 birds per year.

“The ideal time to band them is when they are about 10 days old.”

Human-provided nesting is essential for all martins east of the Rocky Mountains, Susan said.

“In the west, some birds nest in cavities of trees but in the east it’s all human-related.”

The Mitchell’s Bay nests were made from gourds supplied by the CKSS environmental club. The gourds are painted white and have a hole cut in them that is then covered with a lid.

It allows easy access to the nest for banding and to make sure it is kept free of predatory species such as sparrows and starlings that kill the young martins.

The nests are placed on poles between 14 and 16 feet high and are raised and lowered according to need. “The parents are very tolerant of humans,” Smith said. “They just perch nearby and return to feeding the young as soon as we put the nests back up.”

Susan said the last two winters have been hard on the martin population.

“They’ve been migrating north (beginning in March) and they’ve been hit with waves of cold weather. It’s delayed their arrival and decreased the numbers.”

The birds remain in Canada throughout the summer before beginning their six- to seven-week journey south in the fall.

Last year, the Walpole Island project became the first in Ontario to use geolocators to track birds.

“We placed geolocators on 20 birds and we have five here so far,” Richard said.

The project is affiliated with York University, and the Carrs’ mission is to spread information about the birds to as many people as possible.

Each year students from local schools visit the Carrs’ residence and learn about the birds and environment in general.

“We call it bird brain day,” Susan said. “We try to make it interesting and show the young people that we’re all part of the same planet; that we’re all connected.”