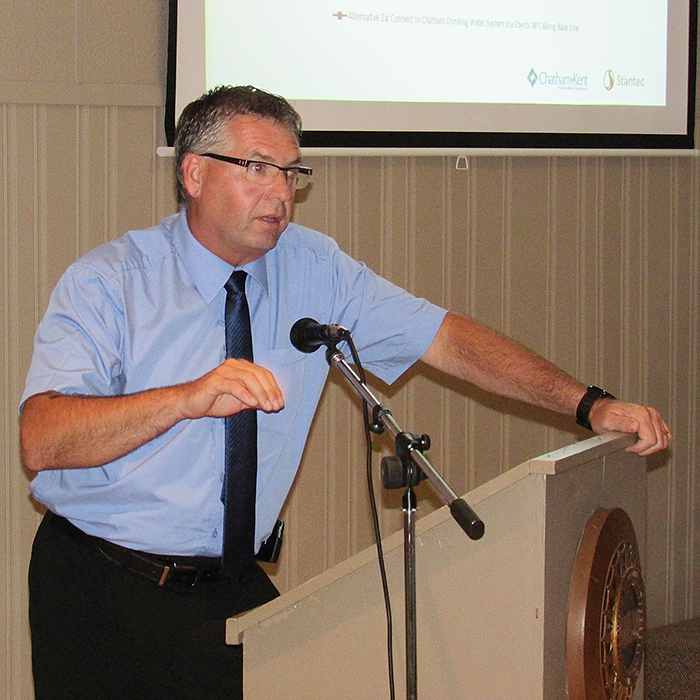 A highly skeptical crowd of more than 100 people attended a public input meeting in Wallaceburg last night to discuss the future water supply of their community.

The meeting was called by Stantec Consulting and the Chatham Public Utilities Commission in response to public concern over plans to close the W.P. Moynihan Water Treatment Plant in Wallaceburg and build a pipeline to connect to Chatham in its place.

After a half hour review of the report, members of the public spent the next 90 minutes questioning the motives behind the report, its methodology, scope and financial assumptions.

Among options offered in the report were variations of plans to connect to Lake Huron, keep the current Snye River source or get Lake Erie water from Chatham.

The report raised and dismissed the idea of connecting the Lambton Area Water Supply System (LAWWS) from Sarnia based on preliminary assumptions of cost. The report also rejects use of the Wallaceburg system as being more expensive over the long term due to needed upgrades.

The presentation was interrupted several times before the question period as residents expressed incredulity at the report and comments made by Stantec presenter Gary Deonarine.

At one point Deonarine said the study had examined whether the water intake for the Wallaceburg plant could be moved to the Sydenham River from its current location on the Chenal Ecarte.

Wesley jumped to his feet and asked Stantec representatives, “Did you ever even look at it (the river)?”

The silty condition of the river meant Wallaceburg has drawn water from the Snye for more than 100 years.

Although the meeting was called to gauge public input, Wallaceburg resident Henrie Timmers accused Stantec of ignoring the very input it said it seeks.

Stantec’s figures show only 74 comments received, of which less than 25% indicate a preference to upgrade Wallaceburg water.

“I’ve contacted Stantec and the PUC to tell them about the petition, but I get no response,” he said. “It looks to me as if you’re trying to minimize the appearance of opposition to this by telling us what you want to hear instead of what we’re saying.”

Wesley said Wallaceburg residents are united in the fact that they don’t want to draw water from Lake Erie.

“Every person I’ve spoken to, every person Carmen (Coun. Carmen McGregor, who also attended the meeting) has spoken to has told us the same thing – they don’t want Lake Erie water. To say you only know of 74 responses is unbelievable.”

McGregor said the Wallaceburg Chamber of Commerce, the Business Improvement Association, environmental groups and others have come out against Lake Erie water.

She also questioned financial aspects of the report that McGregor said she believes have changed since it was first brought forward.

Lambton-Kent-Middlesex MPP Monte McNaughton, who attended the meeting but didn’t speak publicly, said response to his office against Lake Erie water has been overwhelming.

“I don’t think there is any doubt which source residents want,” he said.

Bev Shipley, MP for Lambton-Kent-Middlesex, has stated publicly his support for the continued use of the Wallaceburg, noting, the “Snye River is of better quality than Lake Erie … which continues to face serious water quality issues which to date have not been fully addressed.”

Kris Lee, of the Wallaceburg Advisory Team for a Cleaner Habitat (WATCH) called the report flawed because it doesn’t address water quality.

She noted the ongoing problem with algae, which closed American water intakes last summer, as well as the discoloured and foul-0smelling water Chatham has been dealing with for a number of years, aren’t even mentioned.

Kissner said the municipality recently spent $1 million putting a system in place dealing with that problem; money Lee said could have gone a long way toward refurbishing the Wallaceburg plant.

The audience asked Kissner if the PUC had even considered expanding the Wallaceburg plant and using it to pump Lake Huron water to Chatham, he responded that it wasn’t discussed.

When Lee said given the importance of the subject she would have thought Hope, as chair of the PUC, would have attended, the comment was greeted with catcalls and unprintable remarks.

Bill Currier, a former member of the Wallaceburg Water Commission, was also concerned that the source of water wasn’t discussed.

A committee is being established to provide input to the PUC on the Stantec report, although the number and composition of members hasn’t been finalized.

Kissner said he hopes the committee can wrap up its work this summer so the issue can taken before the PUC for a vote in the fall.

With the final decision eventually in the hands of the PUC, Wesley said those present should make every effort to make their views known.