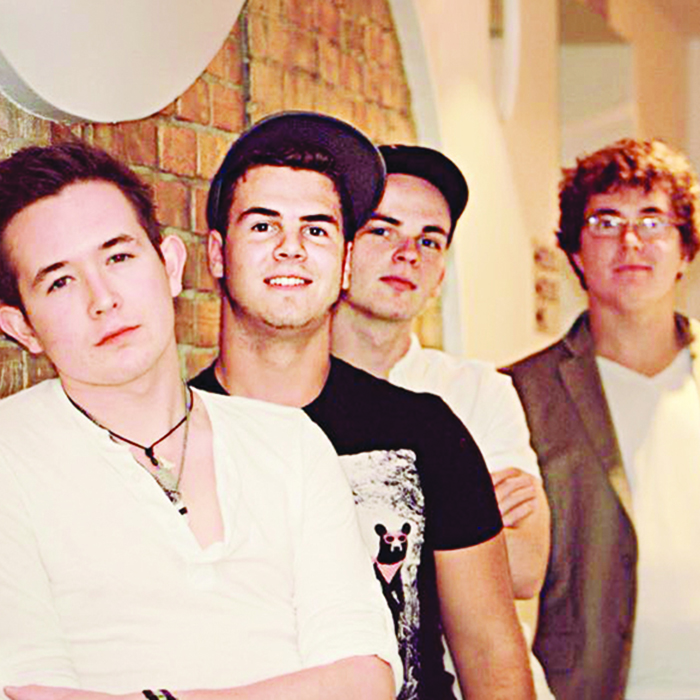 Why do four guys who essentially scattered across south and southwestern Ontario decide to put out their first album?

That’s what technology allowed them to do.

In fact, it enabled them at times to collaborate while in different cities.

That wasn’t always the case for Daryn Trainor, Cole Mills, Dane Appleton and Hudson Cattoor, also known collectively as Objective Unknown. They spent the bulk of their formative teenage years together at Ursuline College Chatham (UCC).

Everyone save Cattoor formed the band in their second semester in Grade 9, when the three were in the same math class.

Cattoor joined the others in Grade 11, replacing drummer Saul Oosterhoff.

They all played in the high school’s concert band together and sang in the choir, Trainor said.

But the end of their time at high school has impacted how often they are able to get together face to face to practice or play. It began in 2012 when  Appleton left for the University of Windsor, where he’s in his third year studying criminology. Trainor is now in his second year in business at McMaster University in Hamilton, while Mills is in second year music at Wilfred Laurier in Waterloo, and Cattoor graduated from Niagara College after a one-year electrical program.

While they can’t all play together, Mills is immersed in music daily in his program, Trainor is part of his school’s jazz band, Cattoor is looking to join the Chatham Concert Band, while Appleton is now producing for other musicians, as well as Objective Unknown.

Thanks to technology, collaborating can now be done regardless of where each band member is.

“We can share ideas when we’re hundreds of kilometres apart,” Appleton said.

“Dane will record a guitar riff and e-mail it to me,” Trainor added.

Appleton has a full recording studio in his parents’ Chatham home, a place the foursome knows oh-so well. It’s where they spent most of their free time after work and on weekends during the summer working on their album.

Trainor said the work that went into the album resulted in “the best songwriting we’ve done.”

On their self-titled debut album, which is available on iTunes, Trainor said you will hear music influenced by bands they idolized while growing up; bands their parents listened to – Led Zeppelin, The Beatles, Aerosmith and Kiss.

There are also other influences as well, as the men say they’ve grown musically over the years.

“When we were younger, we had only three bands we’d listen to,” Mills said. “Jim Dittmer (a music teacher at UCC) opened our eyes.”

Cattoor said that has led to greater variety in the songwriting, showcasing how the band has evolved.

The variety came with a price. Mills said they wrote about two or three albums worth of material, so a lot of it was pushed aside. As well, Appleton said there were nights some of his band mates simply slept in the studio after a long evening session.

Despite all the late nights and long hours, the guys remained close friends.

“When you’re together for six years, you learn to take each other’s criticism,” Cattoor said.

“When we were in the studio, we were band mates. When we left, we were friends,” Mills summarized.

The reward for the hard work isn’t tied to commercial success, he said.

“When I first listened to it, I couldn’t help but smile,” he said of the album, proud of what he and his three best friends have accomplished.

“Looking back at how much work we put in, it’s really rewarding,” he said.

For four guys who remain very passionate about music but realize they aren’t very likely to hit the big time as a rock band, their friendship keeps them connected, and their continued playing binds them a little closer to one another, despite how far apart they are geographically pursuing their careers.