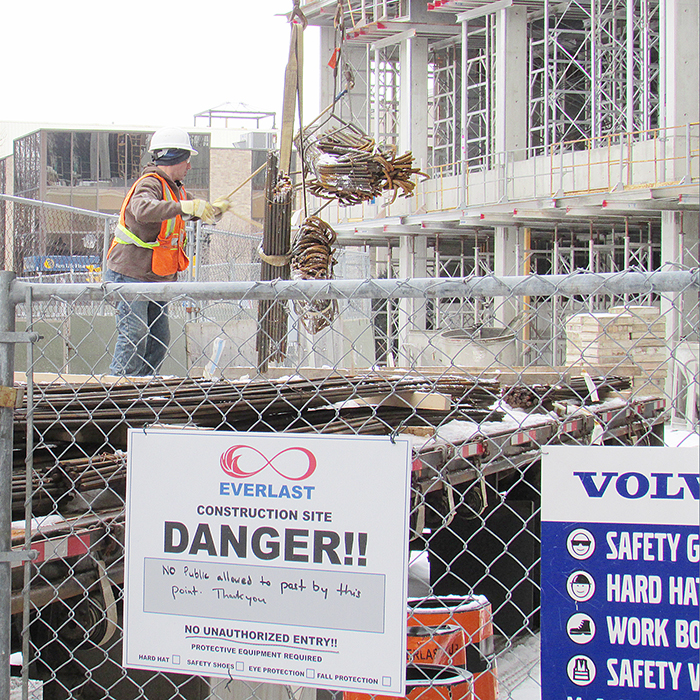 The giant crane which has dominated the Chatham skyline for months swung into action this morning as a load of steel rebar was delivered to the Boardwalk on Thames site.

An Everlast official who refused to be named, said the load is the first of many to be used when construction of the project resumes, reputedly in March.

It’s the first work on the site in weeks, contrary to reports earlier this week.

“The only thing we’ve been doing here is trying to secure the site,” he said. “If you want to tell the people of Chatham something, tell them about the $40,000 of material we’ve had stolen from our worksites.”

The individual, who was directing workers on site, said he’s been with Everlast for 30 years. “It’s a good company,” he said.

“I saw Victor’s car outside my store and went out to talk to him because I’d heard a radio story that the project was back on track,” Francis said. “He just laughed and told me the radio must know something he doesn’t because there hasn’t been any work on the site.”

Francis said Boutin did tell him that he is tentatively planning a re-start on the project sometime in March.

“He said he wants to have a 20-men crew on site so they can begin chipping away some of the cement. He said they have to remove about $1 million worth of work.”

Boutin, who has refused media interviews since he told Blackburn News he was pulling the plug on the project due to union “parasites” several weeks ago, hasn’t responded to Chatham Voice attempts to interview him.