One of my sisters-in-law hosted a pre-Christmas family gathering on Sunday, and asked if I would cook a roast on the Big Green Egg. I had only done one roast on the Egg at that point, so I perused the Internet to see what would work best.

Naturally, prime rib topped the list, but I gave her a list of other less expensive options. But Jane chose the prime rib (it was on sale) – eight pounds of it! 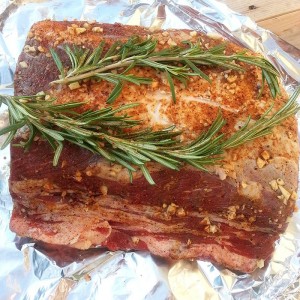 I prepped the Egg, hooked up the Digi-Q fan unit and set it to run at 250 F, putting the roast on at noon.

I programmed the unit to ramp down the heat when the meat got close to an internal temperature of 135 F (nice and medium rare), when it would cut the airflow to the Egg so the temperature dropped to just above 135 F (yeah, it’s a great device). 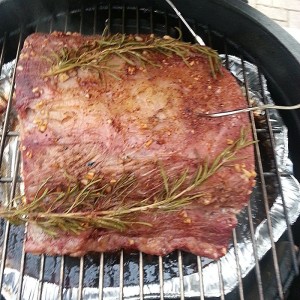 Off to the family gathering we went, while the meat cooked away.

We returned home to the alarm sounding on the Digi-Q. The roast was done.

Off it came. Out came the plate setter that makes the Egg an oven, and in went more charcoal. I cranked the Egg up to 500 F to reverse sear the roast for several minutes on each side. I cut the airflow, delivered some serious smoke, and then pulled off the roast.

We wrapped it in tin foil and put it in the oven to stay warm, while we cooked butternut squash on the Egg.

I wasn’t sure how the roast would turn out, especially when it sat in the oven for about an hour. But I needn’t have worried.

When one of the guys went to carve up the roast, most every other man in the house followed for a taste. It looked and tasted awesome – nice and pink and very tender. You could easily cut it with a butter knife.

Some of the folks commented it was the best prime rib they’d ever tasted. I received tons of compliments, but Mary did the seasoning and the Egg did the rest. I was the caretaker, and an absentee one at that for the better part of the cooking.

I tried Bayside Brewing Co.’s Christmas beer last week, and it was another fine effort on their part, albeit much different.

I didn’t really like the cherry beer they did last summer (but my wife certainly loved it). Then again, I’m not one for fruity beers.

But the Christmas beer at first worried me. It’s a dark beer with a hint of chocolate and peppermint – more oddness for beer flavour. But I like dark beer, and have foggy memories of drinking depth charges (a shot of Peppermint Schnapps dropped into a glass of beer), so I thought it would be worth trying.

It is very unique. The first taste is quite different, but once the palate adjusted, I really liked it.

Now, to find time to slide out there over the holiday season to grab a bite to eat too…

The folks at Swain Bros. in Chatham are professional and hilarious. I was in there last week getting a key cut and saw a sign inside advising ice anglers who brought their ice augers in there for sharpening to leave the burrs on the blades. I was curious and had to ask.

The burrs are left there for a reason – to cut the ice.

Then the folks proceed to tell me they’ve had people complain their augers won’t go through the ice after being sharpened. The first response? Make sure the auger is installed the right way, not backwards.

That’s akin to putting a drill bit in upside down.

Ditto for chainsaw blades. Swain Bros. can sharpen them, but it’s up to the owners to put them back on properly. Install it backwards and the cutting edge of the chain won’t chew into the wood.

COLUMN: Of aches and pains