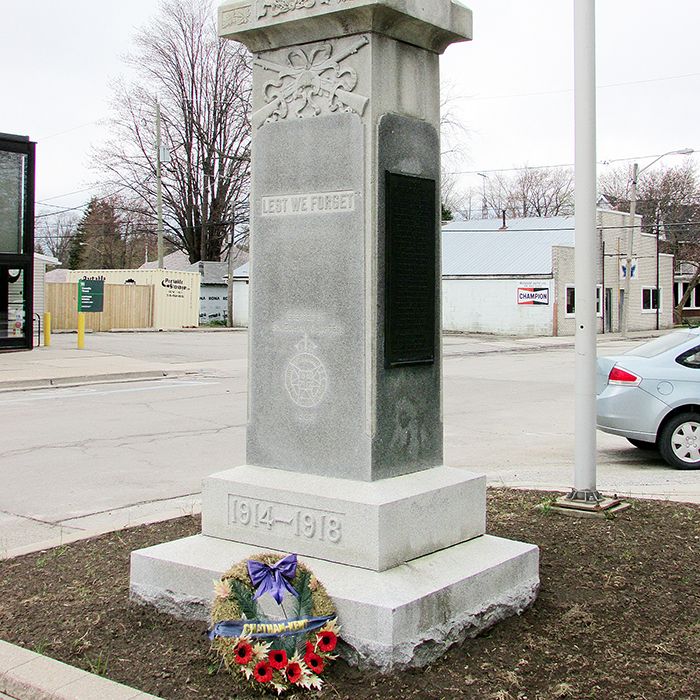 The Dresden Remembrance Day ceremony today was marred by a series of people fainting, something officials are investigating.

According to one witness, Patricia Lunnon-Fox, the day began like any other Remembrance Day, with the students walking to the cenotaph from Lambton-Kent Composite School. But then things went sideways.

“It was really odd. All I saw was this kid lean and then all of a sudden he fell right on his face. It was scary,” she said. “We ran over and then I ran to grab towels and a cold wash cloth from a nearby restaurant.

“He was bleeding. Police and firefighters rolled him over and kept him comfortable.”

Lunnon-Fox said the boy has a gash on his chin and his nose was bleeding, but he appeared coherent.

But the fainting didn’t stop there.

“The next thing you know, two more go down,” she said. “And then two more.”

Scott McKelvie, principal of the high school, confirmed a dozen students were impacted.

“The ceremony was well underway and we noticed a student was helped to the ground by another. Then another student fell. It just sort of dominoed from there,” he said.

Lunnon-Fox said the number of kids fainting was chilling. She has a daughter, Tiffani, who is in Grade 11 at the school.

“After the fifth (student) went down, I said to the teachers that we’d better get the kids sitting down before we had more injuries,” she said. “My daughter, after it was all over, went back to school. She texted and said another two went down at the school.”

McKelvie believes a combination of factors were at play, as the affected students reported experiencing dizziness.

“Yesterday, we counselled the kids to wear heavy clothing because it was cold last year. No doubt some of them did and they walked down to the cenotaph and then stood in the warm sun,” he said.

Furthermore, most of the kids McKelvie spoke to afterwards admitted to not eating breakfast either.

“We’re monitoring the situation and following up with parents.”

“I can confirm that Medavie EMS paramedics and a supervisor responded ‎to the call,” Pancino told The Sydenham Current. “Fifteen patients were assessed and treated at the scene, with three of those requiring additional treatment in hospital. None of their conditions are serious at this time.”

Pancino said all the people treated were ‎under the age of 18.