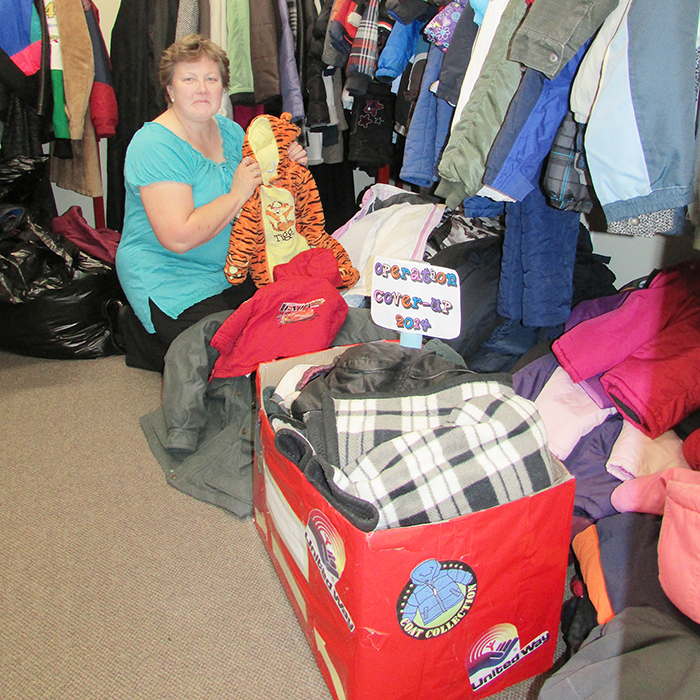 Mary Symons, Good Neighbours co-ordinator with the United Way, sorts through some of the coats received during Operation Cover Up this year. Coats are being handed out by voucher until Nov. 15.

The Operation Cover Up program will soon be zipped up for another season.

As of late last week, the public had donated more than 1,700 coats to the United Way for distribution to those in need.

The giving isn’t over. Mary Symons, Good Neighbours co-ordinator with the United Way and overseer of Cover Up, said people can still donate their gently used coats to help others stay warm for what is expected to be another chilly winter.

“We are still taking coats. We have several bags in our office right now,” she said, even though the official donation period has ended.

Coats are still being accepted at the United Way offices at 425 McNaughton Ave. W. in Chatham.

Folks wishing to make use of Operation Cover Up to clothe themselves or their family can pick up vouchers from now until Nov. 14. Coats can be picked up until the end of the day Nov. 15.

Vouchers, Symons said, are available at the Salvation Army Family Services office on Raleigh Street in Chatham, at the Ontario Disability Support Program (ODSP) on Richmond Street, Employment and Social Services offices on Grand Avenue West by the courthouse and the three United Way offices in Chatham, Tilbury and Wallaceburg.

Symons hopes the number of coats collected, and type, will serve everyone in need. She urges people to take part in the program.

“We’re certainly encouraging individuals to take in the fact it will get cold at some point. Considering winter is where we’re heading, we definitely want to make sure you’re prepared for it,” she said.

Symons is relieved to see that a good number of the coats brought in are for younger people.

“We certainly received coats for toddlers, infants, boys and girls,” she said. “Kids are always a target area. But it is hard to say if we’ve received enough.”
Symons thanked the various dry cleaners throughout the municipality who served as drop-off locations for Operation Cover Up, as well as local firefighters and police officers who took the time on their off-duty hours to collect the coats from the drop-off points.