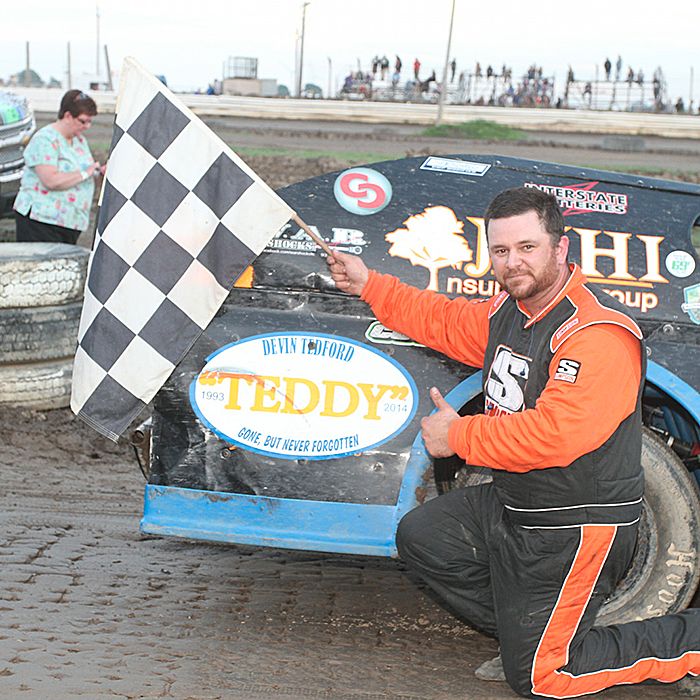 And both teams were able to pay tribute to a departed friend the best way they could – with feature wins at South Buxton Raceway.

The three Hope brothers – Brett, Kyle and Shawn – along with Daniels, displayed ‘Teddy’ decals on their cars in memory of Devin Tedford, a 21-year-old Blenheim native who died last Monday.

Tedford was a lifelong friend of the Hopes, playing minor hockey with Kyle and Shawn, as well as helping out on the race team. Tedford was at the racetrack the previous Saturday night, just two days before his death.

Daniels got to know Tedford by helping the Hopes over the past off-season.

His voice cracked during his post-race track interview, telling the audience he was “dedicating his win to Teddy.”

“It was great that Jeff had the decal and then he went out and won,” Shawn Hope said.

“We were just hoping one of us could follow up and win one too.”

Shawn proceeded to lead all 10 laps to win his first Bombers’ feature, giving the race teams four wins in less than an hour.

Later in the night, Brett finished fourth and Kyle fifth in the Mini-Mod feature.

Daniels’ mid-season championship was his second feature win of the year.

And just like his first on June 6, he was running second when the leader Joe Dick, of Leamington, broke going into turn two.

Daniels led the final 15 laps, holding off challenges from his brother-in-law Brian Speelman, of Chatham, and Shrewsbury’s Jim Dale Jr.

“Once I got in the lead, I protected the bottom, if anyone wanted to pass me, they’d have to go through all the ruts,” Daniels said, as the misty weather conditions early in the day led to a rough track.

Dale Jr., who finished second in the mid-season race, picked up his first feature win since the 2013 season opener in the night’s regular feature.

The race was marred by a crash on a restart on lap six as the leaders Eugene Hoekstra and Dick got together at the drop of the green and collected the entire 17-car field.

“It was like a Talladega crash,” said Daniels, who came out of the carnage with minimal damage and finished third.

Dale Jr. had to pit with a flat tire and was surprised that was all the damage he had.

“I thought it would be worse, I got hit about eight times,” said Dale Jr. who had to restart at the back.

Dale Jr. quickly worked his way to the front and found a groove on the high said to get around Clayton Smith, of Taylor, Mich., and Daniels to take the lead with six laps to go in a race shortened to 14 laps by the time limit.

Authier was leading the regular feature later in the night but was bumped out of the lead in turn four on lap 14 by Dale Glassford, who went on to win the checkered.

As good as he felt about his mid-season win, Authier was just as mad about his second-place finish.

“I was robbed,” Authier said, feeling Glassford should have been penalized for the contact.

“And the caution came out right away, I should have gotten my spot back,” Authier said.

“I tried to get a run on the inside, we made contact and he slid up a little bit,” Glassford said.

“It’s too bad the cars did get together, it’s not like we were trying to take each other out.”

Glassford did not compete in the mid-season championship because he was not in the original starting field a week earlier when rain postponed the race to this Saturday.

It was a one-two Vanderiviere finish in the Tirecraft Sport Stocks as Eric took the lead on lap five and led the rest of the way for his first feature win since returning to the class. He spent the last three years in the Modifieds.

The Vanderiviere brothers have combined to win the last four Sport Stocks points titles, Eric in 2010 when his last feature win in the class came in the season championship race. Eren won the last three points championships.