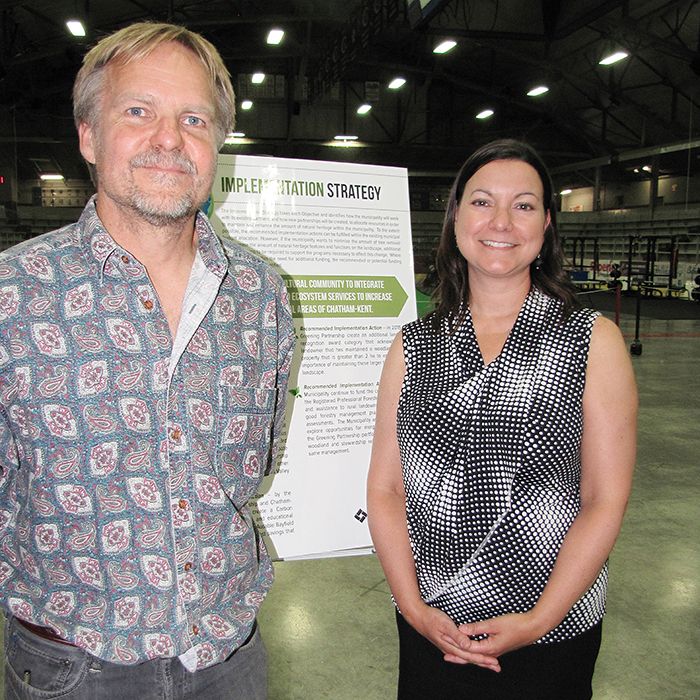 Jarmo Jalava of Carolinian Canada, and planning consultant Jennifer Lawrence were on hand to answer questions about the proposed C-K Natural Heritage Implementation Strategy at a public open house. The community forum was held July 2 at Memorial Arena in Chatham. The conservation policy goes before C-K council on July 14.

The controversial woodlot issue comes back before Chatham-Kent council on July 14.

That’s when councillors are scheduled to vote on the C-K Natural Heritage Implementation Strategy.

Tom Beaton, the municipality’s manager of parks, cemeteries and horticulture, said the policy promotes conservation through education and research as opposed to regulation.

While a conservation bylaw has been written, it has not been voted on by council, which asked staff to develop a policy as an alternative.

The policy was on display at a public open house July 2 at Memorial Arena in Chatham.

As the name suggests, the Implementation Strategy involves a number of actions to build relationships with key groups, give resources to those partners who can make a difference on the landscape and to build “a culture of natural heritage conservation” in the municipality.

Lawrence, who is a planner and a former registered forester, said the policy goes beyond woodlots to include other important areas of conservation.

“Rather than just saying we need to protect this woodlot here and this one over here; it’s about what’s connecting those two woodlots, the system that is keeping it healthy and alive,” she said.

The policy also comes with a business plan that recommends $160,000 for two new positions at the Lower Thames Valley Conservation Authority.

Working to enhance C-K’s greening strategy, one technician would work with landowners on stewardship activities, including improving source water quality and planting riparian buffers. A second technician would track the activities and report on results.

“This effort would actually put the greening effort in overdrive and enable many more projects and bring many grant dollars into our community,” said Beaton.

Since the inception of the greening strategy in 2007, $1.8 million from outside Chatham-Kent has been invested into its conservation efforts.

“There are actual percentage targets for natural cover and forest cover, and retaining a healthy forest in Chatham-Kent,” said Jalava. “This strategy at least gives the municipality some concrete direction in terms of where to invest their natural heritage funds and to really move forward in protecting a landscape that is probably the most threatened in Canada, in a sense, because we’ve lost so much of the natural area.”

Carolinian Canada, along with other groups, has prepared conservation action plans for Chatham-Kent.

Greg Bull, a Chatham resident, was one of a few people who turned out for the open house.

While he liked the idea of a policy, he thought a bylaw would be more effective.

“It would be clearly defined about the regulations and what the penalties are for violating a bylaw. A policy is kind of fuzzy,” said Bull, who also owns property in the Shrewsbury area.

“I have done an environmental restoration of the property with grants. There’s a lot of good policy out there for people who are conservation-minded,” he said.

Louis Roesch, past-president of the Kent Federation of Agriculture, is encouraged by the collaborative approach.

The report will recommend a window of three years to prove that the policy can work.

“If at the end of three years, if we’re not meeting our clearly defined goals and objectives, the council of the day is going to have to decide whether to continue to support the policy,” said Beaton.