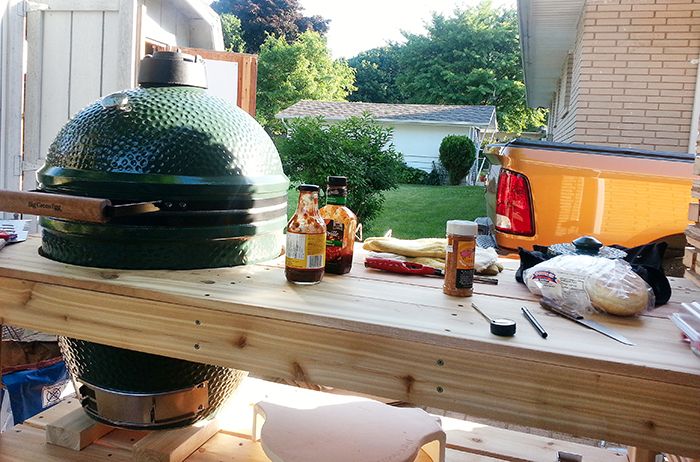 Bruce’s new barbecue, and hand-built table. Plus a couple of barbecue sauces and rub for the chicken that is on the grill.

What a crazy weekend in Chatham-Kent. Threshing Festival in Thamesville, auto show in Blenheim, tractor pull in Pain Court, motorcycle and bicycle events in Chatham, and a funfest in Tilbury.

And we Corcorans attended none of that. Instead the ladies went to the beach one day and did the dance shuffle the next.

As for me, I became an egghead.

I decided about the middle of last week, after seeing more iron flake off my barbecue grill as I scraped it clean, to go for a Big Green Egg. These ceramic monsters are can act as a smoker, barbecue, oven, you name it.

I picked up the needed lumber Friday and started construction that evening in the drizzle. I cooked a final meal on the propane barbecue, finished the frame for the tabletop and added the legs before the mosquitoes chased me indoors for the night. 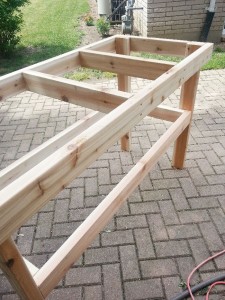 Saturday delivered sunshine, allowing me to continue my work on the table. I am OK at woodworking, but my family looks at me as a rank amateur. That’s why my lovely daughter popped her head out of the door at one point. She said my equally lovely wife wanted to make sure I still had all my appendages. I double checked and all fingers and toes seemed intact, I told her, knock on wood (which she actually did!), and back indoors she went. Shortly after they left for the beach, my Egg Sensei (and I’m sure he hates me calling him that, but too bad), Jeff, arrived and he helped me finish the table, short of cutting a hole in it.

Sunday delivered more sunshine and a question from Jeff. Was Sunday the day to get the egg? He was free. I was free. Off we went, as my daughter attended a one-day dance clinic put on by Dance Attack.

The final hole was a breeze to cut, thanks to a serpentine saw I didn’t even know we had in the house, and in went the egg.

Heck, I didn’t even have a paving stone or fireproof brick to put the egg on, but we put down two 2×4 ends that would support the egg above the table and built the sucker!

Assembly was surprisingly simple. Our biggest challenge was dealing with a periodic assault from a deceased rabbit. I found “Bugs” on our back patio Thursday, stiff as a board. I bagged him and put him in our trash cart. Once the sun hit that bin, the rabbit attacked our nostrils. Whew!

We persevered. Next thing you know, in went the lump charcoal, followed by the little fire-starter square.

At this point, I must tell you one of my big hesitations before opting to get an egg was I loved how fast you can get a propane barbecue up to cooking temperature. It makes it easy to cook quick meals. Well, the egg was at 350 F less than 15 minutes from the initial ignition time.

Sensei went off to snag some chicken to put on there. Naturally he came back with some Italian pork burgers too (the man is a meat fiend).

We tossed on the burgers, relaxed with a cold beverage, flipped them a couple of times, added cheese, and inhaled them. Talk about tasty and moist! We each were in the middle of gobbling one down when the ladies returned from the dance clinic. They too got to sample the first food cooked on the new egg.

Next up, chicken thighs. After about 25 minutes and numerous turns, they were ready to sample.

Talk about juicy. I just want to experiment to infuse all the meat with the flavour, as the skin stole all the spices. Next time, I will cook them with the skin off.

These thighs are a huge reason I opted for the Egg. Jeff cooked some up for me once (along with another five tons of food as he tends to do when people visit) and they were so juicy I was hooked.

We had too much food for us, so most of the chicken went into the fridge. Chicken nachos were in my mental recipe plan for the week, so I’ll let you know how they turned out next week.

So far, so awesome with the Big Green Egg.

These suckers aren’t cheap, but I plan on getting full use out of mine all year long. Yes, it’s a barbecue, but it also is a smoker. I’ve had Sensei Jeff’s pulled pork, and it is off-the-hook tasty.

It is also an oven, as a quick conversion lets you cook anything you would normally cook in your kitchen oven. From baked goods to turkey, these eggs can do it all. And on a hot summer day, who wants to crank up the oven? I’ll gladly fire up the barbecue, however.

I have to admit, until Sunday, I’d never cooked on charcoal before, living on propane or over-the-fire outdoor cooking.

There will be some hits and some misses, but a lot of fun along the way, as I work with the egg.

Perhaps some day, I will be able to snatch the barbecued jumbo shrimp from my Sensei’s hand, and the student will become the master.

Considering Jeff’s love of his egg, that might be a very long way off. 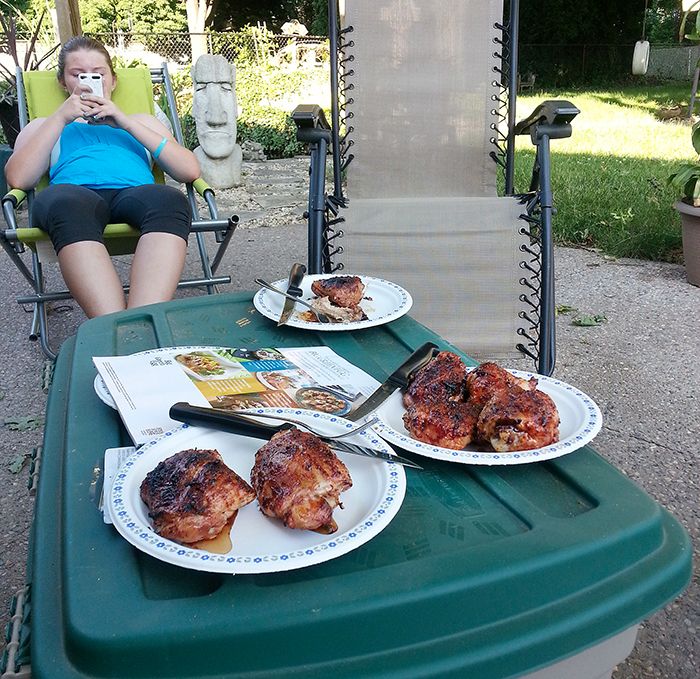 Too much food. Pretty darned good for the first chicken cook on the new BBQ. Our Easter Island head Fred watches over our daughter as she relaxes after a great meal.