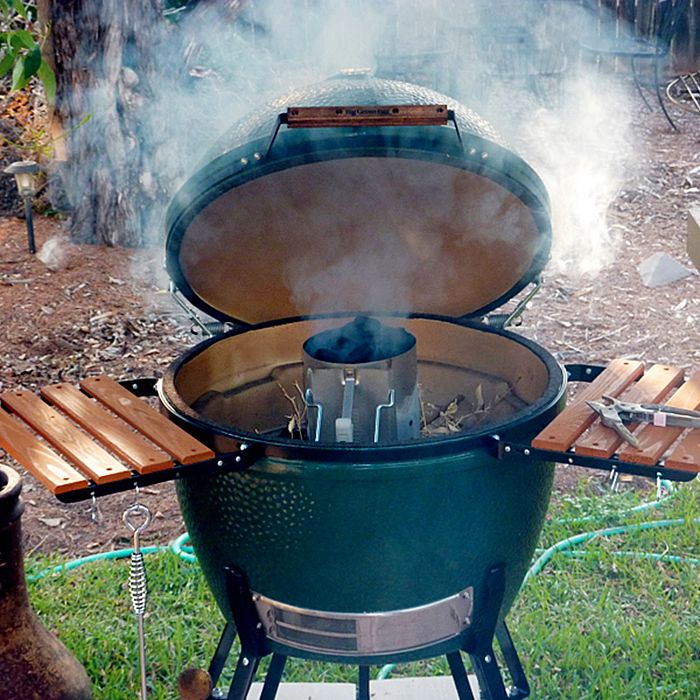 As most people who read this column know, I love to barbecue; and eat barbecued food.

I’ll gladly fire up the grill to cook for folks. And I’m not one to shy away from an invite to enjoy meat from someone else’s grill.

That was the case again this past weekend when we visited friends in town. The husband, Jeff, is a bigger barbecue-a-holic than I am. He also employs a very different grill than I do. Jeff has a Big Green Egg.

And he’s starting to win me over to heading back in time. I’m a propane barbecuer. The egg uses lump charcoal.

I like how quickly a propane unit can heat up. He showed me how fast he could stoke his grill up and get it going. Not quite as fast, but comparable.

And then there’s the taste. Food grilled on charcoal is just better. And food cooked in an enclosed ceramic egg is just plain awesome.

You can’t beat melt-in-your mouth pork on a bun in the backyard with some beverages.

Did I mention Jeff is a wee bit addicted to his egg? His wife Tammy, who also loves everything that comes off that grill, said he’s out there all seasons, cooking and smoking meat at all hours of the day and night.

He’s even got an app on his phone that can control a little fan unit at the bottom of the grill to help maintain a constant temperature.

Think of it as an outdoor slow cooker, which is pretty awesome.

Each time I’ve been to their house, I’ve seen his grilling addiction first hand. Saturday, he cooked pounds and pounds of pork, and we were all pleasantly stuffed.

But then he tossed on a few steaks, just to show us how tender and flavourful they are cooked on the egg.

And then he got it in his mind to make a corn dip, so out came a cast iron skillet, some corn, onion, cream cheese and spices. Into the egg it went.

A bit later in the evening, as our personal fuel tanks just finally started to come off Way-Too-Full to just Full, Jeff had another light-bulb moment. Mix up the leftovers and heat/smoke it all up together. He started with a hash brown casserole, put a groove down the middle, added pork, and then cheese and more spices. Incredible.

I still have my propane barbecue. It will get a lot of use this week and for the rest of the summer. But Jeff has me thinking. That barbecue’s replacement may very well be a Big Green Egg.

And to think I once laughed at a buddy of mine who had a Kamado egg imported from Indonesia many years ago. He swore by it as the best barbecue he’d ever used. I never sampled anything off of it, but wish I had now. I’d have been exposed to such succulence years earlier.

As for Jeff, I imagine about the only thing the dude couldn’t cook to tender perfection on his egg is a corncob. Then again, those things have other uses.