A World of Choices, right here in C-K 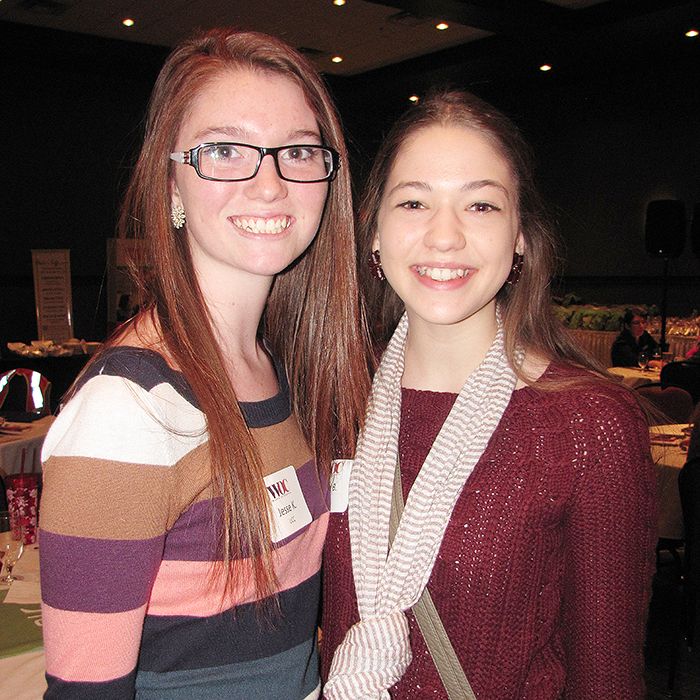 Jesse Kaniecki and Kaila Broadbent were among 70 young women who took part in “World of Choices” at the John D. Bradley Convention Centre March 26. During the event, hosted by Junior Achievement, the young people had the chance to discuss a wide range of career options with 20 successful women from Chatham-Kent.

A Junior Achievement event proved to be an eye-opener for 70 young women who are beginning to look ahead at their future careers.

The first annual World of Choices gave students the chance to meet with more than 20 professional career mentors at the John D. Bradley Convention Centre in Chatham on March 26.

Organized along the lines of a speed-dating session, the career women, all from Chatham-Kent, sat at tables and chatted with small groups of students. The groups then rotated to the other tables.

The mentors were on hand to answer questions and share their experiences about their careers and what they have learned along the way.

“It’s the down-to-earth view on what these careers are all about and what is entailed so they can make better, informed decisions and feel more comfortable about the careers they’re picking in order to move forward,” said Barb Smith, president of Junior Achievement in southwestern Ontario. “We want to give them a bigger, more realistic view on some of the careers they’ve got and branch them out a little bit to show them the traditional and non-traditional careers out there, and really show them what can be done.”

Another key message was that these careers are available in Chatham-Kent.

“Go off and do your college and university, but you can have a great career in this city because these careers could be available to you, and it’s a great place to raise your family,” she said.

Kaila Broadbent, 15, went to the event hoping to learn more about fitness training and kinesiology.

She was able to discuss her potential career choice with a mentor from the St. Clair College Health Plex.

“It opened up my eyes to the things I can do with the job,” said Broadbent, a Grade 10 student at Ursuline College Chatham. “Going to school for kinesiology can open up a lot of doors. She trained some of the police people and the military.”

Another student from UCC, Jesse Kaniecki, was less certain about her future.

But she also came away with some good career information.

“I have no idea what I want to do when I’m older, and by going here and going to all the different tables, I get a bunch of views and pathways that I can take later in life,” said Kaniecki.

Besides career options, the Grade 10 student was pleased to hear about volunteer opportunities in the community.

“I actually like volunteering because when I’m older I can have a set job, but I can also volunteer and open pathways even further,” she said.

In addition to speaking with the career mentors, the students also had the chance to listen to the views of Julie Dill, who delivered the keynote speech.

Now the chief communications officer for Spectra Energy, Dill is a former president of Union Gas in Chatham.

One Response to A World of Choices, right here in C-K