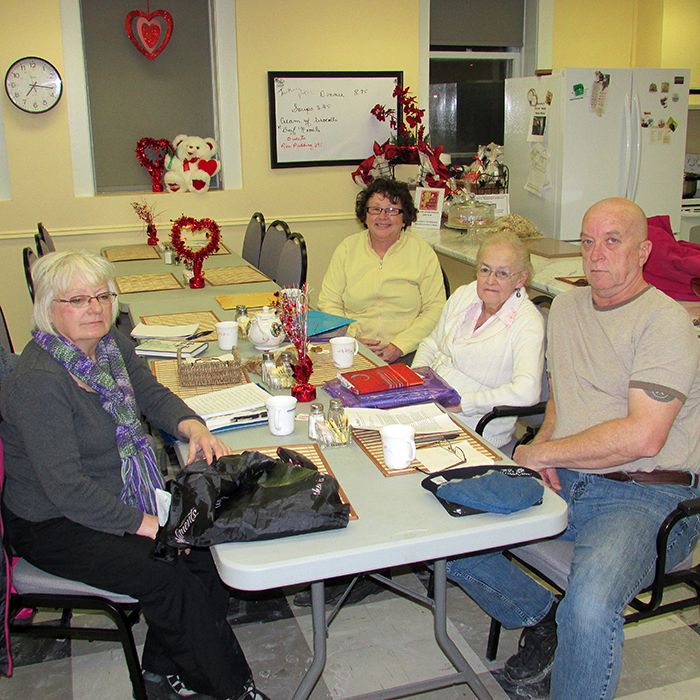 “All my life I’ve looked at words as though I were seeing them for the first time.”
― Ernest Hemingway

An unlikely quartet of Wallaceburg residents now in their retirement years is taking that sentiment to heart as they venture into the world of words in a whole new way.

Calling the twice-monthly sessions a “writing class” might be a big of a misnomer because they learn as much about themselves as they do about writing.

“At this point in our lives, we’ve seen so much that it’s really helpful to put things down in words,” he said.

The group has been meeting since last April when Gallant was able to convince Jenkins to act as its mentor.

“Chris has published several books and I knew she’d be excellent at this,” she said.

Jenkins, a former nurse, who is self-published, said although members critique each other’s work, they aren’t critical.

“When you’re sharing something you’ve written, you’re really sharing yourself,” she said. “It’s the sum of your experiences put on paper.”

Gallant, who worked as a waitress and now operates the centre’s kitchen, agreed.

“When you’re writing you open up a window and once it’s open, you can’t hide it.”

Southgate, whose working years were largely spent in the industrial sector, said each member brings a different perspective to the class.

“I worked in factories for a lot of years,” she said.

“The pay was good but there wasn’t any outlet for creativity. Writing was something I enjoyed but I didn’t really have time to do much.”

She does recall writing a letter to her mother at a particularly low point in her mom’s life.

“I just wrote how much I though of her and what a great mother she had been,” she said. “It was then that I learned about the power of words.”

Each of the members writes primarily about their own experiences, but they share the same passions and pitfalls.

“When I write something, the words sometimes come so fast I can’t keep up,” said Burrage, as the others nod. “When I’m writing, I’m always adding something to the story. Other times, it’s like a dry well.”

Tea and cookies are set aside momentarily as Gallant begins to read a story which she said was a bit too long for a recent assignment.

A tale of lost opportunity and missed reconciliation wends its way for the next several minutes.

At its conclusion, there is a moment of silence while those present consider the meaning of what they’ve heard.

For a moment, no words are spoken and none are needed. The listening was enough.