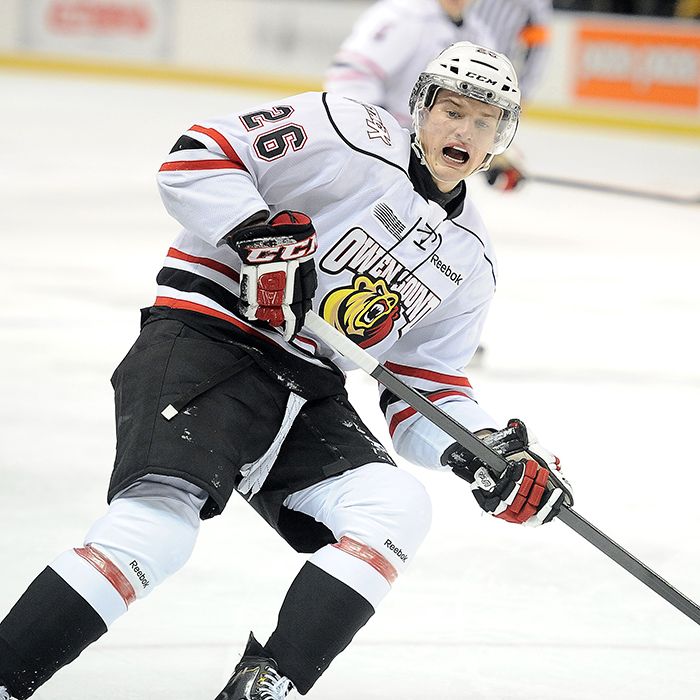 The end of one stage of Kyle Hope’s hockey career is rapidly approaching, but the Blenheim resident is banking that it won’t be the final stage.

Hope is in his fifth and final season in the Ontario Hockey League, splitting his career between the Oshawa Generals, and his current team, the Owen Sound Attack.

“This league has been a pleasure to play in and such a great experience all five years,” said Hope, who played Midget AAA for the Chatham-Kent Cyclones up until 2008-2009. “I came in as a wide eyed 16-year-old and I have grown so much on and off the ice. It’s been amazing.”

With the final days of his OHL career ticking down, Hope, who is known for his tough on-ice demeanour, and playing with a physical edge, has only one personal goal in mind, being signed to an NHL contract.

“Personally, in the final part of the season, I am playing to earn myself an NHL contract,” explained Hope. “It’s been my goal since entering this league.”

He has had a taste of the NHL over the past two summers, attending the New York Rangers rookie camp two summers ago, and earning an invite to the Vancouver Canucks main camp this past offseason. As for comparisons, Hope doesn’t have to look far for motivation, as two of his former Chatham-Kent Cyclones teammates, Dane Fox and Seth Griffith, have both signed NHL contacts in the last year with the Vancouver Canucks and Boston Bruins respectively.

Hope feels he has a lot to offer to any team that comes calling.

“I think I could bring an energy, grit player, with some skill to a team,” said Hope. “I finish checks and play hard, and on the inside. It’s something I thrive on, and being a hard-to-play-against player.”

Being a player who brings a variety of traits to the ice is something Hope has proven he can do over his OHL career. Hope has played both defence and the wing on each of his OHL teams, and has improved his goal and point totals from year to year, while racking up more than 100 penalty minutes the last two seasons.

It isn’t all about personal goals for Hope, however, as he is focused on helping the Owen Sound Attack win, and serving as a leader for the younger players on their roster.

“As a team I just hope to give the younger players some knowledge and someone to look up to, and help them get better every day.”

Even after his final OHL campaign ends, Hope knows he has work to do to continue improving, and to prepare himself for his first professional hockey season, at whatever level he finds himself playing.

“My goal to improve is to just work my hardest every single day, and have no regrets come the end of the season. Also, just continue to do video and work on the details of my game, just to keep getting better.”