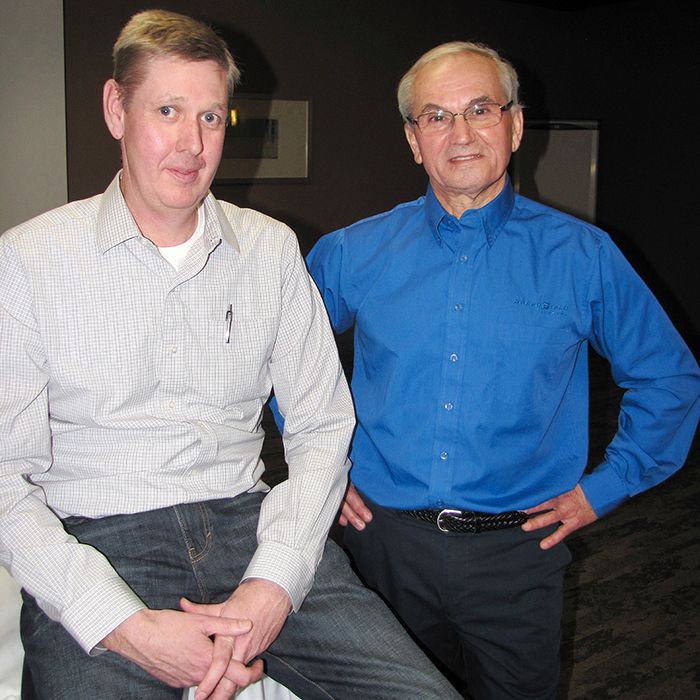 Greg Devries, president of Truly Green Farms, and Angelo Ligori, general manager of GreenField Ethanol, discussed their innovative plans at the Chatham-Kent Farm Show at the John D. Bradley Convention Centre in Chatham. The plans call for the ethanol plant to provide CO2 and waste heat to boost tomato production in the greenhouse complex on Bloomfield Road.

The days of steam billowing from the smokestack at Chatham’s ethanol plant – along with the odour – could soon be numbered.

Capturing that steam is one of the benefits of a unique partnership between GreenField Ethanol and Truly Green Farms. The latter is the large greenhouse complex being built across from the ethanol plant on Bloomfield Rd.

The two companies are working on plans that would see the greenhouse operation use carbon dioxide that results from processing corn into ethanol, as well as excess heat from the ethanol plant.

Greg Devries, president of Truly Green, and Angelo Ligori, general manager of GreenField Ethanol, provided an update of the plans at the recent Chatham-Kent Farm Show.

“Our goal is to use innovation to redefine the greenhouse industry,” said Devries, who hopes the operation can start using the CO2 later this year.

Devries noted that greenhouses use natural-gas-fired boilers to heat water that is piped through the building to radiate heat.

As all greenhouses use supplemental CO2 to stimulate plant growth, they capture the CO2 from the exhaust of the boilers.

Producing the CO2 is easier during the cold months, but it’s limited in the summer because the boilers are being used less.

The collaboration with the ethanol plant is aimed at boosting the levels for Truly Green’s tomato production.

“We’ll be able to use CO2 not tied to the production of heat from our boilers (and) we’ll be able to have higher C02 levels than conventional greenhouses would ever be able to sustain,” said Devries. “And some of the work that we’ve done says if we can maintain a higher level of CO2 during the summer months when the crop is producing its utmost, the potential is an extra 3%-5% yield.”

Another goal is to eliminate the smokestack and capture the waste heat from the ethanol plant that could reduce Truly Green’s heating costs by as much as 50%.

After the meeting, Ligori said the smokestack would remain but the process would condense the steam and “reduce the plume of smoke to a wisp.”

While much of the engineering work has been done, Ligori and Devries could not say when the process would begin, but they hope it would be within 18 months to two years.

“At the end of the day, there’s an opportunity for a consumer that is environmentally- conscious and wants to pay a bit of a premium for that,” said Devries. “We’re looking at using a greenhouse gas to increase the production of a local, healthy food.”

With plans to build 90 acres, the economic potential of Truly Green is also significant.

Quoting industry statistics, Devries said one acre of greenhouse production creates two jobs inside the plant and two indirect jobs outside the plant.

“Hopefully it’s a small piece of how we can redefine what this municipality does,” said Devries.

Truly Green Farms is a collaboration of three families in Chatham-Kent.

Construction of the first phase of 22.5 acres of greenhouse tomatoes was completed last year and the first tomato crop was planted in July.