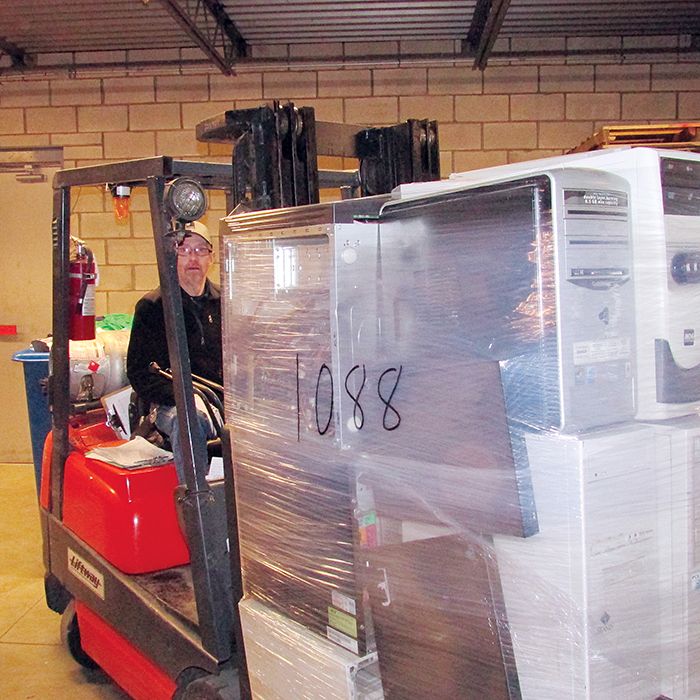 Fred Dawdry moves a skid of computers via forklift in the Goodwill warehouse on National road in Chatham. The 14,000-square-foot National Road facility serves as the central sorting and shipping depot for Goodwill operations in the Essex, Kent and Lambton.

When Kevin Smith looks at a discarded television set, he doesn’t see what we do; he sees a job.

The chief executive officer of Goodwill Industries in this area has made it part of his organization’s mandate to turn unused and unwanted items into employment. He’s done it through a regional recycling centre in Chatham, which is celebrating its first anniversary.

“We have a lot of material coming in through our retail stores so it was imperative that we have a use for what we can’t sell,” he said. “We can help the environment and create jobs at the same time, so it’s a win for the entire community.”

The 14,000-square-foot National Road facility serves as the central sorting and shipping depot for Goodwill operations in the Essex, Kent and Lambton (EKL) region.

“Chatham just makes sense for us,” he said. “It’s central.”

Operations manager Don Aitchison said in its first year, the centre took in 5.1 million pounds of goods and was able to recycle 3.4 million pounds, or 70%.

“Our goal is zero material going to landfill,” he said.  “The accepted figure for that is 90% because some material just doesn’t have any use.”

A wide variety of items are recycled through the centre including books, clothing, shoes, electronics, glassware and metal.

Aitchison said the recycled material is used in Canada and around the globe. “Depending on the quality or nature of the items, they can end up here or in the Third World,” he said. “We have one vendor who is collecting backpacks for Africa so you never know where things will end up.”

Goodwill EKL employees 193 workers throughout the region, including 53 in Chatham-Kent who work either at the career centre and the Grand Avenue retail store.

Apartments, homes on the rise in C-K