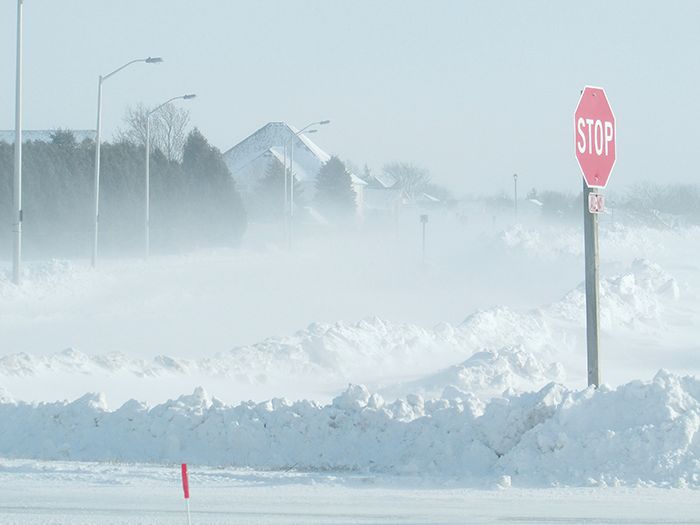 Wayne Pollock, who runs the department, said the high winds are wreaking havoc.

“The wind is still up and it’s very, very cold. The guys are having a difficult time keeping a number of the roads open,” he said.

Weather reports have the wind slacking off somewhat Wednesday afternoon. Pollock said his personnel hope to start winning the snow battle at that time.

“Once the wind dies down, we can start making more headway,” he said.

In the meantime, Pollock said the fleet of 55 plows and 21 road graders – augmented by a number of snow removal contractors – are out and about clearing snow from 3,400 kilometres of roadway in Chatham-Kent, 2,900 of which is rural.

“The cold is affecting some of the equipment. It’s breaking down or freezing up,” he said. “Sometimes, we have to bring in the equipment and warm it up.”

Conditions reached a point Monday night where the plows just couldn’t keep up in rural parts of Chatham-Kent and visibility was horrible, so the municipality pulled the plows off the road. He said they were back in action early Tuesday morning, while the plows in urban parts of the municipality remained operational all night.

He added the southern part of the municipality seemed to be suffering more than the northern half Monday night, but only marginally.

The heavy workload is taxing. Pollock said crews are fatigued, but they’ll be out for some time to come.

“Rural north-south roads are really getting socked in. Even the plows are getting stuck. We have had to open some areas with front-end loaders.,” Pollock said. “That’s time consuming.”

As well, plows have to make sure they don’t smack into vehicles that have become stuck in the snow and abandoned.

“There are a lot of stranded vehicles out there,” Pollock said. “I don’t think we’ve hit one yet, but there’s lots of snow over them.”

In urban parts of Chatham-Kent, residents are still prohibited from parking on municipal streets until after 3 p.m. Wednesday. Pollock said the parking ban, in place since Sunday afternoon, has been a boon.

“Most people have been very good with the parking ban. We’ve had only a few issues where we had to have a vehicle moved,” he said. “It certainly helps us get the snow back to the curb line.”

Later in the week, temperatures are expected to climb to seasonal levels and even a bit above. At that time, Pollock said moving the snow, which at cold temperatures is “rock solid” in places, will be much easier.