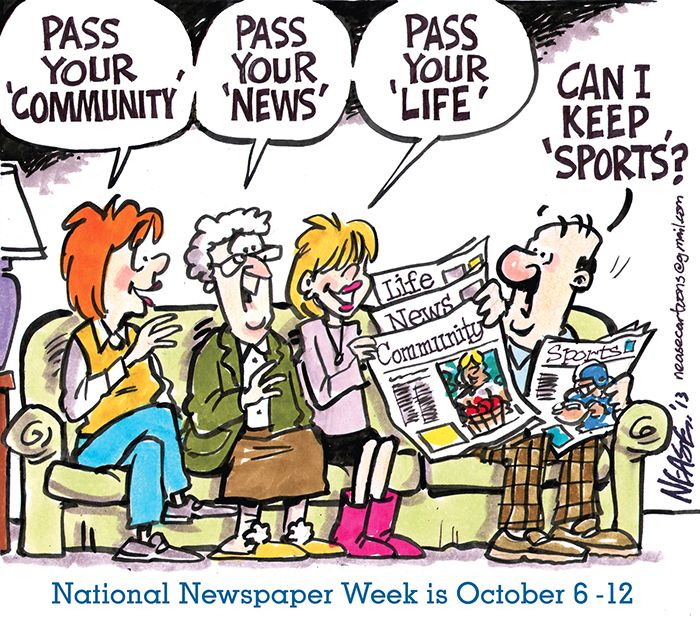 You shouldn’t be reading this – especially our print edition.

Newspapers were supposed to have been eliminated by that new thing called the World Wide Web (which is 22 years old, by the way).

Before that we, were being bumped off by network television, which debuted in 1949 (it was going to kill radio too).

We’re reflecting on our craft this these days as Canada marks National Newspaper Week. To celebrate, we’re helping throw a $2 billion dollar party and inviting more than 19 million of our closest friends.

The $2 billion represents roughly amount of advertising dollars spent in Canadian newspapers and the 19 million is the number of people who read of one our nation’s 1,100 community newspapers each week. Not too bad for an industry which is having dirt shoveled over it by everyone from hipsters to marketing “experts.”

Truth be told, newspapers have had a difficult time adjusting to changes brought about by technology. A decade ago they still didn’t understand the Internet or the use of social media.

At The Voice, we’ve embraced and developed an online presence. We have almost double the Facebook likes of any other local community paper.

While the way we deliver our product is changing, we believe content is still the measure by which we’re judged.

We’ve shunned the cookie-cutter; one look-fits-all model and we’ve opted for something local.

We tell your stories, whether they be the heartwarming tale of a couple bravely battling a life-threatening illness, a father touched by his participation in a walk against violence or a young athlete whose hard work earned her provincial honors.

We’re not afraid to look where others don’t as we’ve taken the lead in reporting on lawsuits against local politicians, questionable actions at provincial agencies or illuminating municipal spending habits.

We even answer the phone when you call – how outdated is that?

We’ll leave the obituaries to others whose opinions, although a century apart, sum up the situation.