Two hundred years ago marked a bloody day in history when the Battle of the Thames was fought along the present-day Longwoods Road near Moraviantown.

While thousands fought in the original battle, approximately 500 re-enactors dressed as British, Americans and natives and came from as far away as Washington and England joined on the battlefield on Saturday to give spectators an idea of what happened two centuries ago.

Travelling from far distances to re-enact is a hobby for many of the battle’s players, who were all responsible for their own ensemble, with the exception of the Canadian Cowgirls.

Wallaceburg dentist and Battle of The Thames president Mark Dickerson knows better than anyone what a high level of dedication was needed to make the event a success.

“It’s been a huge commitment for him. He’s lived and breathed it for the last couple of months,” said McKay.

“He told me he was getting hundreds of e-mails a day,” McKay added.

McKay and the committee researched the historic conflict to give the audience the most authentic performance possible.

For McKay, the past two months have been a steady and exciting countdown to the battle day.

“I think it’s going to feel like a great accomplishment,” said McKay.

“It’s a good feeling that things went well,” he added.

Originally estimating 20,000 people to attend the event, McKay said it is impossible to calculate the exact number.

“Our best guess is to look at once the battle is on, we can get a better approximate because we’ll all be gathered in one place,” said McKay.

McKay, from London, says he remembers attending his first re-enactment in 1988 at the Faire At The Forks in Chatham with his dad.

That was a moment he never forgot, sparking his interest in the War of 1812 among many of the other re-enactors.

“When I was old enough to join, I joined re-enacting,” said McKay.

That type of curiosity brought thousands of attendees to the historic site to watch history unfold once more during the bi-centennial celebration.

Among them was purveyor of goods for re-enactors, Ken Hall, and his wife Jan from Ohio.

Carrying a replica of the American flag that would have been waved on the very same land two centuries before, the couple dressed in period clothing and looked forward to seeing the battle.

“This is probably the biggest 1812 event I’ve seen in years,” said Hall said. “I think it’s a good example of living history.”

The enthusiast, who previously attended the former Faire At the Forks for years, said he was impressed with the crowd who braved the clouds in the sky. 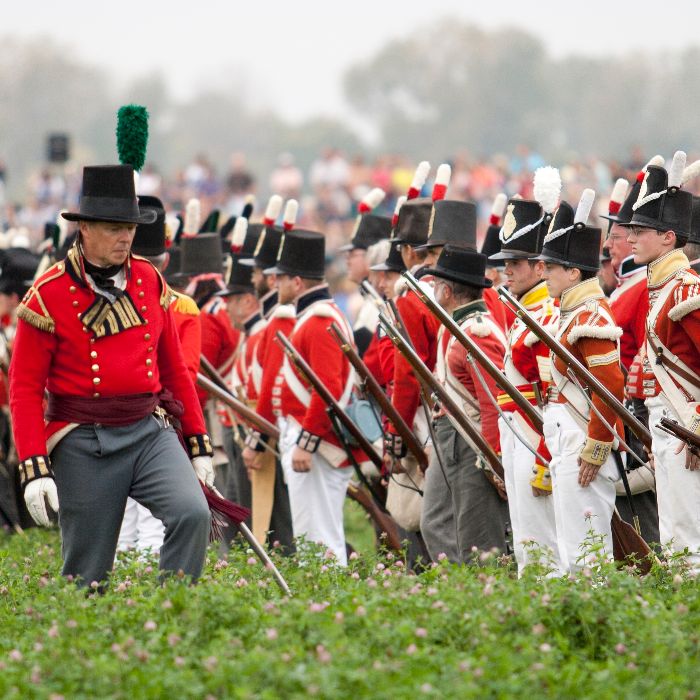 British soldiers wait for the command to fire during the Battle of The Thames re-enactment celebration held along Longwoods Road on Saturday.