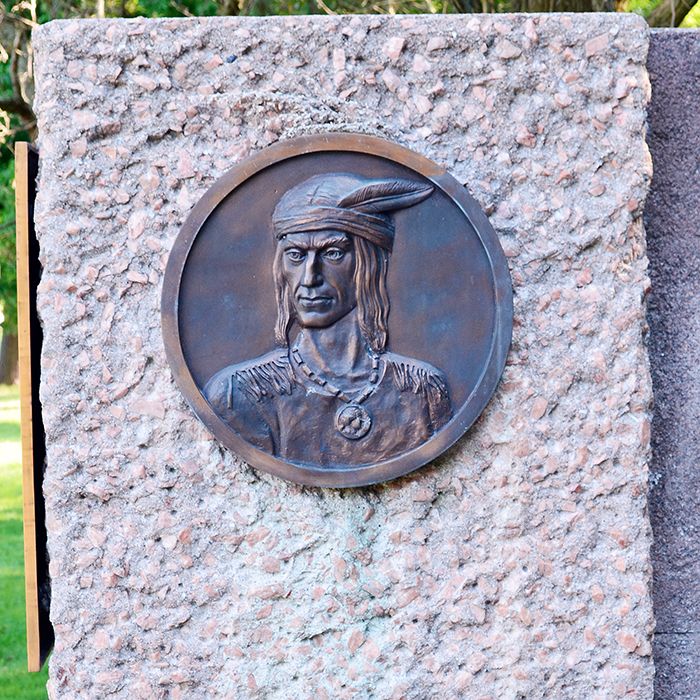 The municipality is looking for ideas to build a new monument in honour of Chief Tecumseh, the War of 1812 hero that fell in battle in what is now Chatham-Kent.

Tecumseh, a Shawnee warrior and First Nations leader, formed a native confederacy and allied with the British after the first shots rang out to start the War of 1812.

The warrior died in battle after the British retreated up the Thames River and past Chatham following a naval defeat on Lake Erie in 1813. Tecumseh was killed in the Battle of the Thames on Oct. 5, 1813, just east of what is now Thamesville.

The current monument is little more than a rock, a plaque, a couple of park benches and some concrete, which prompted the formation of the Friends of Tecumseh Monument Group.

Through the group’s fundraising efforts, and the municipality setting aside provincial and federal grant money, there is a pot of about $200,000 for redevelopment of the eight-acre monument site, said Chatham-Kent Museum curator Stephanie Saunders. The hope is to receive an additional $350,000 in federal funding for the project.

Last week, Chatham-Kent officials released a request for proposal for conceptual drawings, timelines, product descriptions and estimated costs for the monument, which would be located at the battle site on Longwoods road.

The RFP will be distributed nationally.

“We want a new monument designed and constructed, including an interpretive plaza, with room for bus tours.

Saunders said the RFP process closes Aug. 14 and the successful bidder will be announced at the bicentennial reenactment Oct. 5.

Jim Gilbert, a director with the Friends of Tecumseh Monument group, said the effort to redevelop the monument has been a long time coming.

“It’s been a long, drawn-out process. The (federal) government hasn’t been extremely supportive of it,” he said. “When you look at Brock’s monument and you look at Tecumseh’s monument, you can understand why the natives are a little upset, and Lisa and I too.”

Where the Tecumseh monument contains the aforementioned rock and plaque, the monument to Sir Isaac Brock, the British general who perished in the Battle of Queenston Heights in the War of 1812, is a large marble edifice with a statue of Brock at the top.