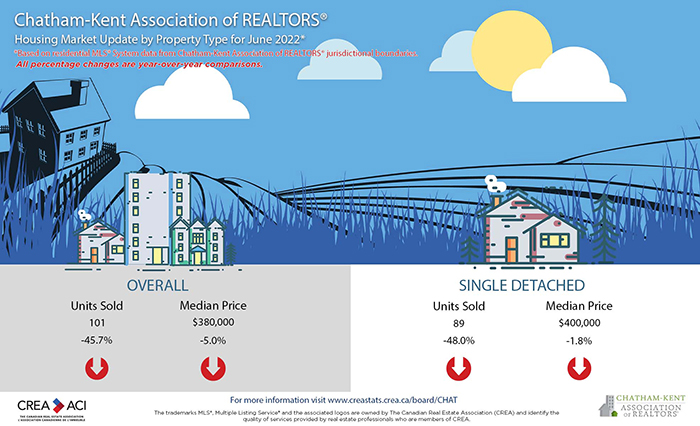 Home sales in Chatham-Kent dipped sharply in June, down nearly 46 per cent from the same month a year ago.

The weak month dragged down the year-to-date totals as well. For the first six months of 2022, 752 units changed hands, according to Chatham-Kent Association of Realtors (CKAR) figures. That’s a drop of more than 16 per cent from the same period in 2021.

“Home sales posted another year-over-year decline in June, continuing the moderation that began earlier this year in March. The outsized year-over-year decline in June is only partially a result of dampened activity this year – the rest of the magnitude stems from the abnormally high record set in the same month last year,” Amber Pinsonneault, president of CKAR, said in a media release.

“New listings are coming back onto the market in stronger numbers as the year progresses. Combined with weaker demand, this is lifting overall inventories from their rock-bottom levels and allowing the market to rebalance itself,” Pinsonneault said. But she added caution is needed. “However, much uncertainty lies ahead regarding future interest rate increases and what impact these will continue to have on the housing market and even the economy.”

The uptick in new homes hitting the market and the slower sales activity saw 283 homes listed at the end of June. That is up massively from the same month of 2021, by nearly 83 per cent.

Active listings haven’t been this high in the month of June in five years. In fact, they were nearly 29 per cent above the five-year average, but still more than 27 per cent below the 10-year average for June.

The decline in the volume of sales saw the overall dollar value of sales drop nearly 43 per cent from June 2021, however. 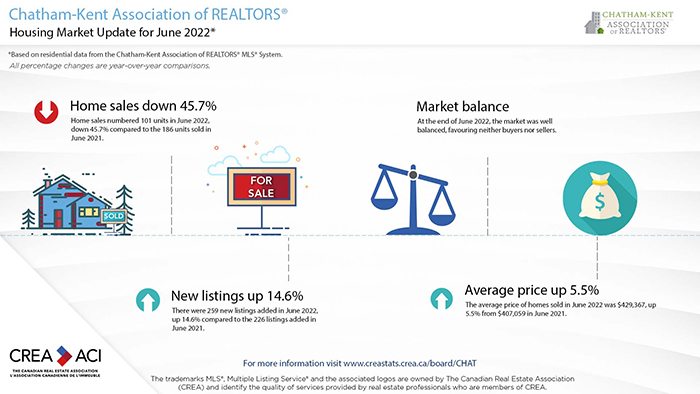