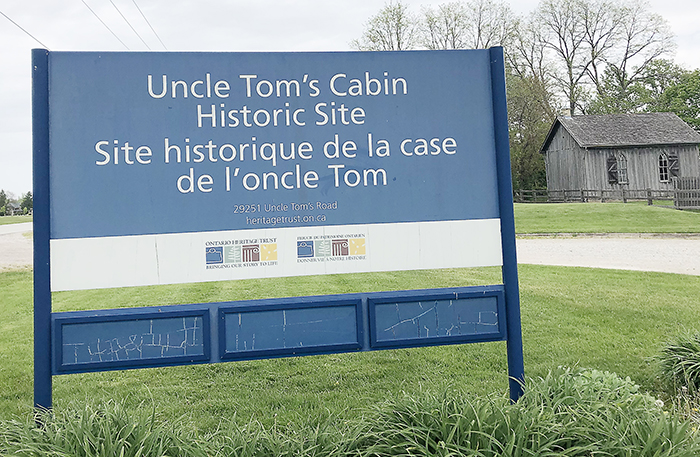 Street to change to ‘Freedom Road,’ and cabin to get new name too

That’s to be the new name of the one-kilometre stretch of gravel near Dresden, now known as Uncle Tom’s Road.

The request for the change, endorsed by Chatham-Kent council June 20, came from the Ontario Heritage Trust (OHT), the provincial agency that operates the Uncle Tom’s Cabin Historic Site.

Another big change is in the offing.

According to site curator Steven Cook, the trust will be renaming the Uncle Tom’s Cabin site prior to Emancipation Day July 30.

But for now the new name is under wraps. When it will be revealed remains a secret.

The renaming of the road has sparked a lot of conversation, both positive and negative on social media, but Cook said this is a good thing.

“We were hoping it would open a dialogue and it has,” Cook explained of the road renaming. “We want the focus to be on Josiah Henson – not Uncle Tom. Uncle Tom was a fictional character. He didn’t live on this road but Josiah Henson did.”

Henson – the real-life subject of Harriet Beecher Stowe’s work of fiction – had already achieved much before Stowe’s book was released in the United States.

The Maryland-born slave had made the perilous six-week journey via the Underground Railroad to freedom in Canada and was helping others before Stowe’s book was released in 1852.

In fact the ambitious Henson had already become a preacher, co-founded a school, was the first Black exhibitor to speak at the World’s Fair in London, England and wrote his 1849 memoir ‘The Life of Josiah Henson, Formerly a Slave, Now an Inhabitant of Canada.”

While the book became catalyst for the anti-slavery movement that reached millions, the term “Uncle Tom,” then – as now – is a pejorative slur used to disparage a Black person deemed to be humiliatingly subservient to white people.

“Nobody calls us that,” he said. “We know how insulting it is.”

As for critics who claim the name change is newfound liberal “wokeism,” Cook said it’s a move that has been in the works for many years.

“I guess you can say we were woke for a while,” he added.

“This is something they wanted to happen,” Cook said.

The consultation group also reached out to 18 other Black History sites of note. Cook said they heard back from 14 that whole-heartedly support the change.

The responses they heard, Cook said, included “Praise the Lord” and “It’s about time.”

There are other reasons for the name change. Cook said there’s a municipal bylaw on the books that says you can’t reuse a name that’s already been used, meaning Henson’s name couldn’t be incorporated into the latest change. Prior to the 1960s there was a Henson Street on the outskirts of Dresden that has long been closed.

There’s another even bigger reason for the change. Down in North Bethesda, Maryland on the plantation where Henson was born, the Josiah Henson Museum and Park has opened.

Part of the United State’s national park system, the American site has “twinned” with the Dresden site – a historical first.

As for the criticism that the name change is rewriting history, Cook said it’s simply “reclaiming Henson’s story.”

“The words are prophetic,” Cook noted. When Henson and family arrived in Buffalo, NY after their journey north, they were still faced with crossing the water to Canada.

It was then the impoverished Henson pleaded with the captain of a schooner asking for free passage.

“The captain agreed to do it as long as Josiah promised to use his freedom well,” said Cook. “And Josiah kept that promise.”