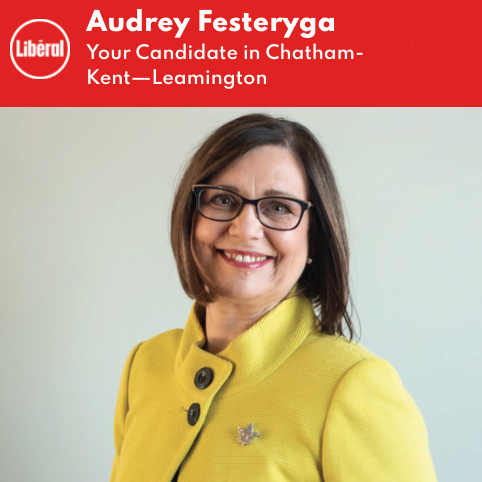 Local NDP candidate Brock McGregor said something is wrong with the nomination forms for another candidate, and he wants Elections Ontario to look into the matter.

McGregor and the NDP are accusing the Liberals of registering Chatham-Kent–Leamington (C-K–L) candidate Audrey Festeryga with what they said appeared to be fraudulent documents at the registration deadline May 12.

Festeryga was a last-second replacement for Alec Mazurek, who was acclaimed at a May 7 meeting and then fired several days later after it was learned he had used homophobic slurs eight years ago on social media.

Festeryga’s paperwork went in just before the deadline, and McGregor said he was curious.

“We went and took a look at the nomination forms, which they submitted something like 15 minutes before the deadline,” he told The Chatham Voice. “We looked and saw a couple of inconsistencies. I recognized names on there and contacted a name and they said they had signed the form for the first candidate (Mazurek), but they did not sign the form for the new candidate.”

Candidates must submit 25 signatures of electors living within the riding supporting their nomination. The NDP believes the Liberals appear to have instead submitted the original names, addresses and signatures collected by Mazurek, and attached them to Festeryga’s nomination papers.

Andrew Ernesaks, press secretary for the Ontario Liberal party, said the party is “confident the nomination of our candidate Audrey Festeryga is perfectly valid.”

Del Duca at a Wednesday morning press conference in the GTA, fielded questions from reporters on the matter. However, he would not say if fraudulent signatures were used.

“I think it is a really sad time with 16 days left in this campaign that (NDP leader) Miss (Andrea) Horwath and the NDP have resorted to desperation tactics,” he said. “I’m disappointed to hear Miss Horwath and her team want to continue to focus on attacking me and Ontario Liberals.”

“Was the candidate signed up with fraudulent signatures,” she asked off camera.

“I’m not going to stand here and engage in this petty back and forth with Andrea Horwath and her team,” Del Duca replied.

According to the NDP, the signatures utilized in Festeryga’s nomination package are dated May 11, a day before the Liberals tried to nominate Festeryga. The NDP said they confirmed the signatures were witnessed by Mazurek, the former candidate, and at least one document was dated May 8.

Media relations officials with the NDP said they have documentation from at least one person, Mike Brown, a resident of Chatham, who signed the nomination forms for Mazurek, but did not for Festergya, yet Brown’s name still appeared with the latter’s forms.

“Earlier this month, a young man named Alec Mazurek came to my house in Chatham. He told me he was the Liberal candidate in the upcoming election and needed signatures to get his name on the ballot. I signed the forms, as I wanted to support a young person being involved in politics. These are the only forms I have signed for the provincial election,” Brown reportedly told the NDP. “I have not met nor heard of Audrey Festergya until I learned that my signature is on her forms. Nobody asked me to sign forms for Ms Festergya.”

McGregor, a Chatham-Kent councillor, accused the Liberals of cutting corners and not being straight with the voters of C-K–L.

“It’s consistent with the (Steven) Del Duca Liberal sense of entitlement that they don’t have to follow the rules,” he said. “I’ve been in municipal politics for eight years, showing up every day. I certainly felt at times this riding does not get very much attention. This is another case of a major political party ignoring Southwestern Ontario.”

He added he thinks Del Duca, the Liberal leader, owes the people of C-K–L an apology.

“We here want to see individuals involved in politics who won’t cut political corners,” he said.