In the old Sears warehouse in downtown Chatham, a grassroots collective is taking shape.

Located in the donated space at the Downtown Chatham Centre, people are building, painting and creating.

There’s also an area where anyone who wants to can access donated clothing and a small food bank. Or maybe they just want to have a friendly chat.

The space is infused with a ‘no questions asked’ feel where people are welcomed regardless of their circumstances.

It’s all part of the ongoing work at the new Community Shop that’s operating under the umbrella of Come Together CK.

James ‘Curly’ Peterson is one of the regulars. He was homeless and living in Chatham-Kent’s shelter when he came across the collective.

Down on his luck with severe health problems, Peterson was a quiet man who kept to himself.

He didn’t say much.

But now, after utilizing his carpentry skills and making friends at the collective, his life has turned around.

He’s now renting a place in Blenheim, looking forward to each day and mentoring others.

“This is a good place,” Peterson said. “If you save one, it’s worth it…my life has completely changed.”

Tina Thorpe is another local resident who has found acceptance with the evolving group. She helps organize the space and is one of the first welcoming faces at the door.

“There’s a little bit of everything here,” Thorpe said as she showed a visitor around, adding she hopes the initiative continues.

“We all need help, whether its emotional, physical or through donations,” Thorpe said.

Various activities are percolating. In one corner, three men work on building a boat-shaped little library that’s destined for Mitchell’s Bay, while in another section a young woman paints a raised flowerbed that’s been requested.

In another room, Thorpe paints a bright pink and blue picnic table that’s going to be donated to Hope Haven.

Brent Wilkin said the shop came to be after the success of The Gift and the Miracle. The DCC Sears warehouse – where much of the goods from the Christmas food drive were stored – became a hub for volunteers.

Wilkin said the effort is based on “humanity not hierarchy.”

Wilkin said the first 10 people that came together were from the homeless shelter, and it has “evolved from there,” attracting people from all walks of life and economic circumstances.

Based on the Buurtzorg concept from the Netherlands, the collective’s model begins with the client and flows outward, with decision-making based on the good of all, rather than a top-down approach.

The Buurtzorg nursing company’s example, which recently celebrated 10 years of success, is now being followed across the world – a departure from the traditional way businesses operate.

Wilkin said the Chatham venture is simply answering a need.

“It’s about listening and allowing things to emerge,” he added.

Wilken, who helped organize The Gift and the May 16 Miracle drives, said the aim of the Community Shop – is “extreme engagement.

“It allows people to be themselves,” he said. “No one is the boss, because everyone’s the boss. We offer encouragement and provide a space.”

They’ve also pitched in as part of Come Together CK, to help clean up the downtown and undertake other pursuits such as cleaning snow from cars.

When it comes to building items – the little library is an example – Wilkin said the group takes “requests” rather than job orders.

The effort has also drawn support from afar. Yao Zhang is a case in point, He moved to Chatham from Montreal because of the good energy generated by The Gift.

“I drove here and loved what I found,” the friendly Zhang explained.

Zhang earned a PhD in neuroscience from the Massachusetts Institute of Technology and has lived in a lot of places around the globe, said he appreciates what he’s found in Chatham-Kent.

He said he’s looking for a job in horticulture here and plans on putting down permanent roots.

Wilkin said the collective was able to bear fruit thanks to the generosity of the new owners of DCC, but by the end of March they will be looking for a new home as the space is being repurposed.

“We’re looking for a new space with the hope we can continue,” he added. 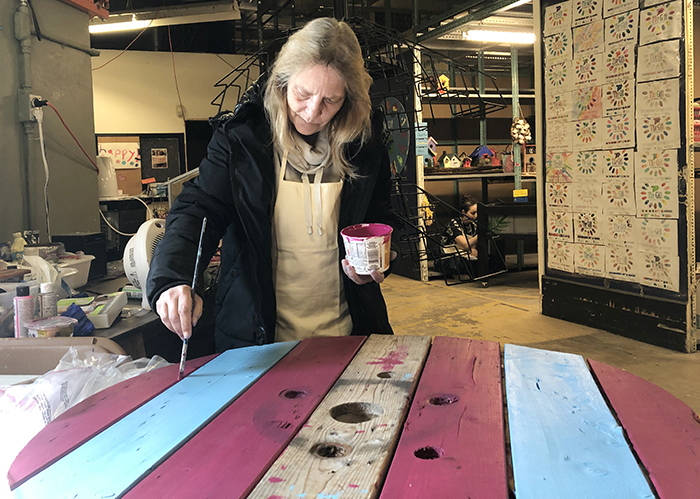