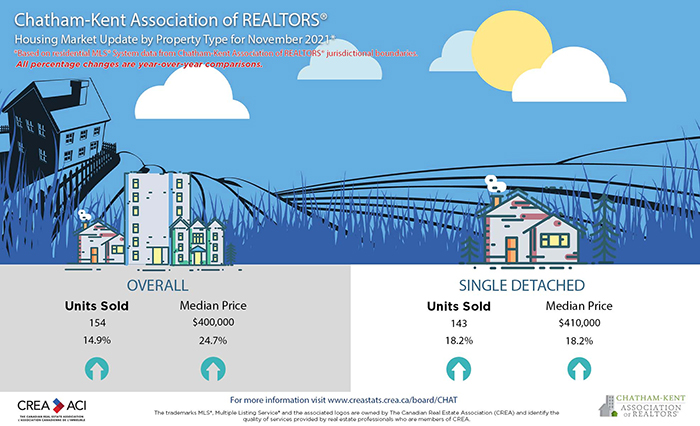 Another month, another sales record; that’s the norm in Chatham-Kent property sales this year.

According to Chatham-Kent Association of Realtors (CKAR) numbers, last month was a record November in terms of number of homes sold (154).

That was a gain of nearly 15 per cent from the same month a year ago and the most ever sold in the municipality in a November.

Laura Tourangeau, president of CKAR, said new listings are starting to pour in as well.

“Home sales jumped to the highest November in history on the back of an ongoing resurgence in new listings. With just one month left to go we’ve already set a new annual sales record in 2021,” she said in a media release.

She said other area markets aren’t seeing the resurgence in new listings.

“One important difference between our market and many others in Southern Ontario is that we’ve seen a much-needed return of new listings, which has helped to satiate the unrelenting levels of demand out there among home buyers,” Tourangeau said. “Make no mistake though, listings are currently just keeping pace with demand and overall supply levels are still trending at historical lows.”

In terms of dollars and cents, the value off all home sales last month topped $69 million, a more than 55 per cent from November 2020, and a new November record.

As for new listings, as Tourangeau said, they are up substantially. New listings rose by nearly 29 per cent when compared to November 2020. The 170 new listings in November represented the largest number of new listings added in the 11th month of the year in two decades.

Furthermore, the influx was at a rate nearly 35 per cent higher than the five-year average for the month of November. 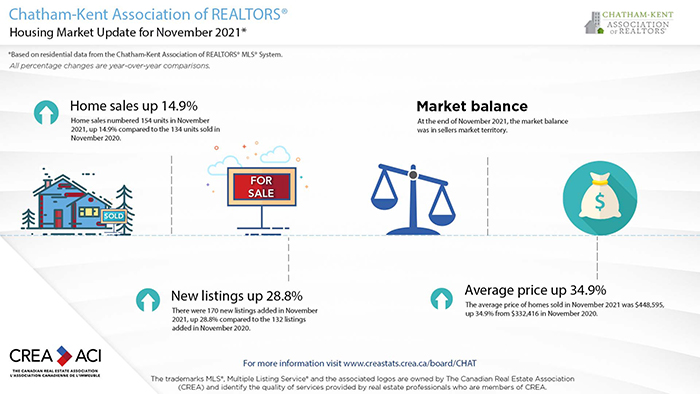