A tapestry display in honour of Scottish heritage will soon be on display in Chatham.

The Baldoon Tapestry, which celebrates Scottish history in Chatham-Kent, goes on display Oct. 12 in the Rotary Lounge at the Capitol Theatre.

Artist Susan Larke is one of the people who stitched on the tapestries. Larke grew up in Wallaceburg.

A total of 37 tapestries depicting the Scottish exploration and settlement of Canada are coming thanks to a collaborative effort of the C-K Cultural Centre, Tulip Tree Needlearts guild and the City of Guelph Museums.

These tapestries were started in 2012 by Baron Gordon Prestoungrange and Scottish artist Andrew Crummy as a project to celebrate the Scottish Diaspora, a worldwide migration of Scots to all corners of the earth.

To date, more than 300 panels have been done by needleworkers all over the world as a tribute to the people who left their homeland and contributed so much to their adoptive countries.

The latest tapestry to join the international collection was done by Tulip Tree Needlearts Guild in Southwestern Ontario. It celebrates the 102 highlanders who sailed to Canada in 1804 to settle in Baldoon in what is now Dover Township in Chatham-Kent. These are the people who would go on later to found Wallaceburg.

The tapestry was designed by a local artist, Katherine McFadden Stinson and stitched by members of the Needlearts guild and interested members of the public.

The tapestry is divided into two parts, using the ship, the Oughton, that brought the people to Canada, as the dividing line between the great expectations of a fertile land with many sheep envisioned by Lord Selkirk on the left, and on the right the harsh reality represented by dense marsh.

Lord Selkirk is seen in profile looking left to his vision of a land of plenty for his settlement. Sheep and grassland with a small marsh to provide game for the tenants was his dream.

To the right is a larger marsh with 7 mosquitoes flying above it to represent the seven early settlers who died of malaria. Above the marsh flies a goose representing the Baldoon mystery, a curious piece of folklore involving shape-changing and baffling events from the early days of the settlement.

Below the ship, in blue, various bodies of water are represented. 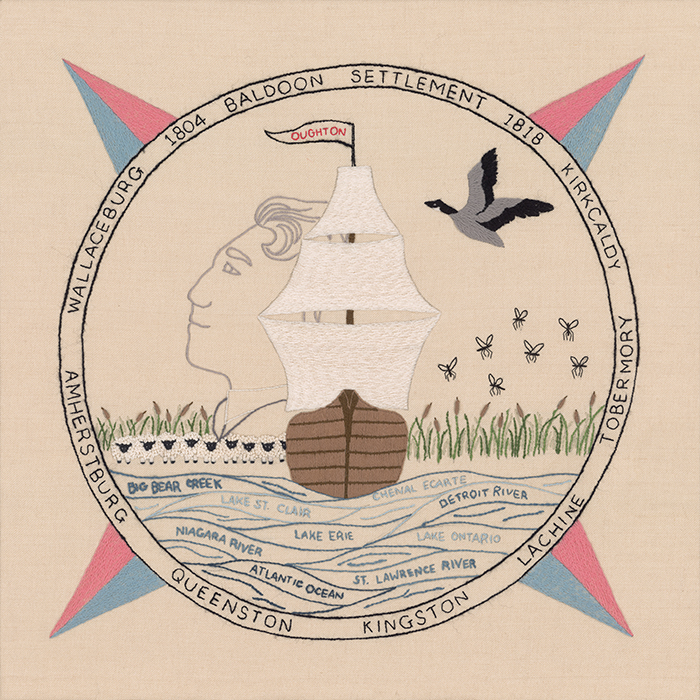