What does it take to move a rock? Muscle, right?

Well, it turns out it takes a great deal more than that to move a massive 37-ton boulder from Morpeth into a park in Chatham.

That’s what the McKeough family found out in recent years, but they are all smiles these days after the boulder – which stands about seven feet high, 12 feet long and 10 feet wide – is now resting in McKeough Park on Grand Avenue in Chatham.

Stewart, who is 99, orchestrated the boulder’s relocation. He said the move had been in the works for a year, but finally came to a conclusion on May 21.

The boulder came from the Talbot Trail farm of Doug Desmond, which has been in his family for more than 200 years.

The massive boulder is a glacial erratic, a rock that was moved by glaciers 30,000 years ago and then left behind when the glaciers melted.

Donating the rock was one thing. Moving it in modern times was an altogether different story.

The McKeoughs approached several local companies about transporting the rock, but the sheer size of the boulder left them scratching their heads.

“We tried several different people. A few looked at it and said it was just too big, that they didn’t have the equipment,” Stewart’s daughter Bonny McKeough said.

But Yarmouth Group Inc. from St. Thomas offered to give it a try.

They came on May 21 and moved it. They lifted it up with a large crane, put it on a flatbed and drove it into the park.

It took some help from Mother Nature to make the move possible as well. The dry spring left the ground hard, allowing the heavy vehicle to enter the park and not get bogged down in wet soil.

McKeough Park is named after William Stewart McKeough, who was killed in the First World War. His nephew, Stewart, took an interest in the park about eight years ago, at age 91.

The park was in some disrepair so Stewart decided to plant a variety of Carolinian trees on the property.

Stewart also added a variety of large rocks to the park, but nothing as large as what landed there May 21.

“We couldn’t find many big rocks, and ones we did, the owners didn’t want to give them up. We went to a quarry near Leamington and got some limestone, but we wanted granite,” Bonny said.

The idea is to have the park as an educational area for local students, given its close proximity to Ursuline College Chatham.

Most of the trees are labelled. At some point the rocks will be too. The students can go there and learn. 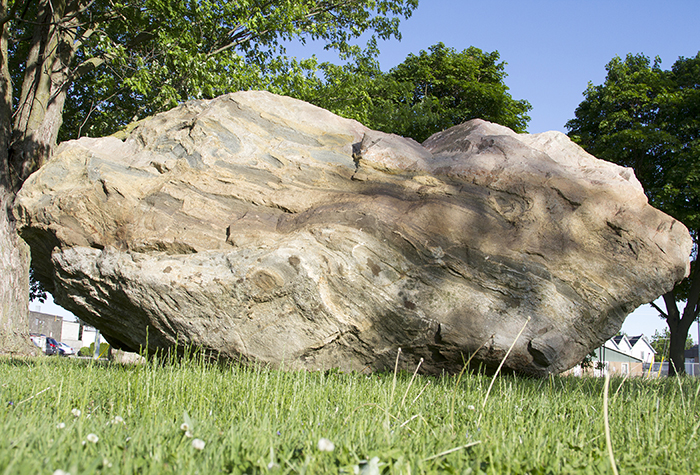