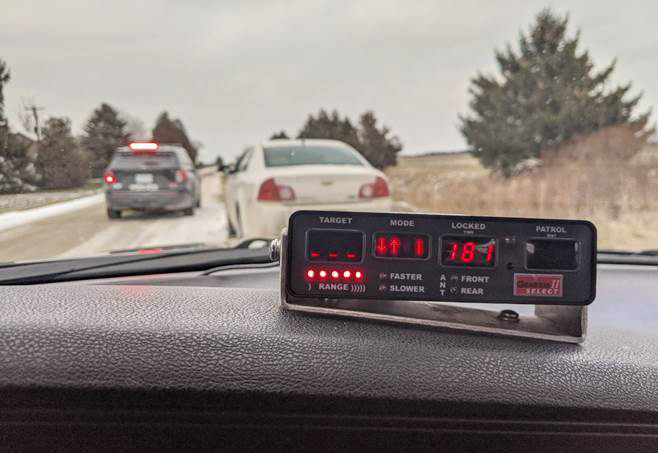 Yesterday afternoon, an officer on general patrol observed a vehicle travelling at a high rate of speed on Fairview Line. The officer recorded the man driving 181 km/h in a posted 80-km/h zone.

The man attempted to evade police but was located on Maynard Line near Mull Road as he struck a concrete culvert, rendering the vehicle inoperable.

Through investigation, the officer believed the man was driving while under the influence of alcohol, and a Standard Field Sobriety Test was conducted, which resulted in his arrest.

The man was transported to police headquarters for breath tests where he registered more than twice the legal limit.

A 19-year-old Ridgetown man is charged with impaired driving, stunt driving and being a young driver with a blood alcohol concentration above zero. He was released pending a future court date.

Through investigation, police learned that the driver was travelling at a high rate of speed when they lost control, left the roadway and struck a hydro pole and Bell box, causing more than $30,000 damage.

Officers identified the driver and located him at a nearby apartment.

Officers believed the man was driving while under the influence of alcohol and he was arrested and transported to police headquarters for breath tests.

A 32-year-old Chatham man is been charged with having a blood alcohol concentration exceeding the legal limit.

Shortly after 1 a.m. this morning, police responded to a collision on Aberdeen Street in Merlin.

Through investigation, police learned that the driver lost control of their vehicle, left the roadway, striking a parked vehicle and house.

Officers identified the driver and located him a nearby residence.

Officers believed the man was driving while under the influence of alcohol and he was arrested and transported to police headquarters for breath tests.

A 42-year-old Merlin man is been charged with having a blood alcohol concentration exceeding the legal limit.

Yesterday morning, police responded to a shoplifting complaint at Wal-Mart in Chatham.

Through investigation, police learned that the man concealed items in his coat and fled the store on foot.

Officers located the man hiding in a nearby tree line.

Following a short foot pursuit and struggle, the man was taken into custody.

Officers searched the tree line and located more than $400 worth of stolen items from Wal-Mart and the Real Canadian Superstore.

Last night, police responded to a domestic disturbance at a residence in Chatham.

Through investigation, police learned that a verbal argument between the man and his common-law wife escalated into a physical altercation.

A 45-year-old Chatham man was arrested and charged with assault and uttering threats.

On Dec. 23, a utility trailer was stolen from a property on Erieau Road in Blenheim.

On Tuesday, police received information that the stolen trailer was at a business on Queens Line. Officers attended the business and observed two men pulling the trailer with their vehicle.

A 41-year-old Chatham man and a 39-year-old Tilbury were both arrested and charged with being in possession of the property obtained by a crime.

The owner of the trailer was notified.

Sometime between Tuesday night and Thursday morning, someone entered an unlocked residence on Nelson Street in Wallaceburg.

Once inside, the suspect(s) stole a 70-inch Samsung television, guitar and PlayStation gaming system. Total value of the theft has been estimated at $2,000.

On Tuesday, a man was released from Court with several conditions. One of those conditions stated that he was to notify police within 24 hours of his address in writing.

Last night, police located the man at a local motel and he was taken into custody as he had yet to inform police of his current address.

A 47-year-old man was charged with failing to comply with his release conditions. He has been held in custody pending a bail hearing.

Yesterday afternoon, a man wanted for failing to attend for his fingerprints and court along with impaired related offences, attended police headquarters and turned himself in.

A 20-year-old Windsor man was arrested and released pending a future court date.

Yesterday afternoon, police arrested a man who was wanted for failing to comply with his release conditions.

A 40-year-old Wallaceburg man has been held in custody pending a bail hearing.