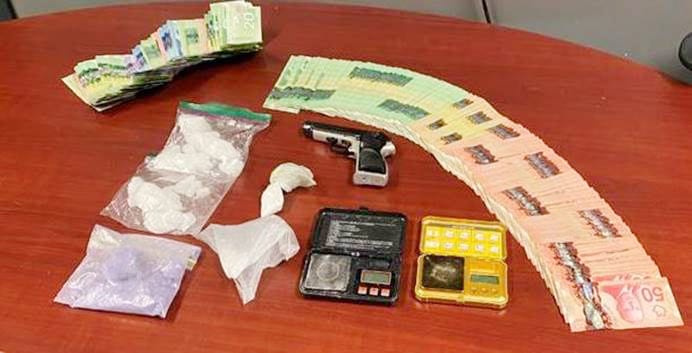 Yesterday, members of the Chatham-Kent Police Intelligence Section executed a warrant in Chatham.

Officers observed the man exit his residence and drive to a local motel. Officers approached the man in the parking lot and he was taken into custody.

A search incident to arrest revealed that the man was in possession of three cellular phones and large amount of cash.

A warrant was executed on his vehicle. In the trunk, officers seized suspected fentanyl, cocaine, methamphetamine, handgun, ammunition, electronic digital scales and large amount of cash.

The 32-year-old Chatham man has been charged with:

– Possession for the Purpose of Trafficking – Fentanyl

– Possession for the Purpose of Trafficking – Cocaine

– Possession for the Purpose of Trafficking – Methamphetamine

– Unauthorized Possession of a Firearm

– Careless Storage of a Firearm

– Fail to Comply with a Release Order (2 counts)

– Possession of a Restricted Weapon Contrary to Prohibition Order (4 counts)

Total street value of the seized drugs has been estimated at $76,600.