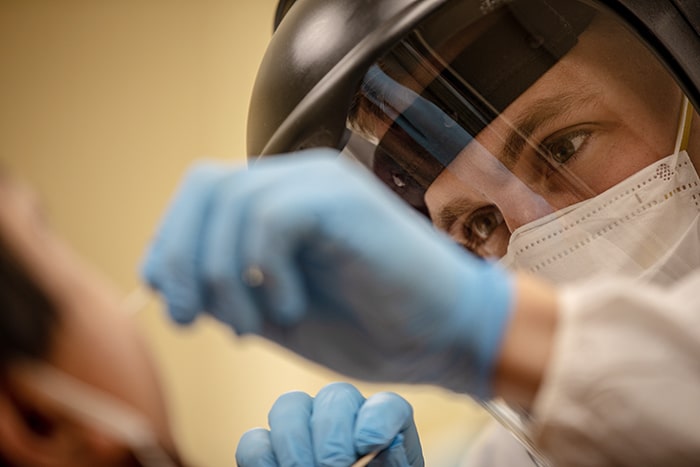 Pharmacy testing not coming to C-K just yet

The number of residents getting tested for COVID-19 is once again creeping up at the Chatham Assessment Centre, as cases across the province continue to rise.

This week has seen approximately 200 people a day visiting the centre located on Emma Street. Normal volumes have been 100 per day, according to Lori Marshall, CEO of the Chatham-Kent Health Alliance (CKHA) who spoke to reporters at a press briefing on Thursday.

“We are looking at different models that might allow us to respond to even greater volumes in the event that it was required in our community,” she said. “We’re paying attention to our current situation and also what’s going on around the province and are prepared to respond.”

The model includes expanding hours and adding rooms at the current assessment centre. CKHA will also be looking at alternative locations that will allow the centre “to have a larger footprint and be more convenient for people attending.”

The current physical facilities can accommodate 500 people a day, numbers which were seen at the peak of local testing in August. During that time, CKHA partnered with emergency medical responders to use their staff and vehicles in order to meet the demand.

Marshall said the current centre is not ideal for 500 people per day, especially with winter right around the corner. Residents having to wait outside, and lack of parking spaces, are concerns.

In the meantime, Marshall is reminding residents wanting to get tested to book an appointment in advance, online or by phone.

“Very much we want to avoid people lining up. In particular, we’re paying a lot of attention right now because we want to avoid families needing to line up because we know that standing in line for a long time with children is probably not something that any resident would enjoy doing,” she said.

In order to take the pressure off some of the assessment centres, the provincial government is allowing pharmacies to offer free COVID-19 testing to asymptomatic individuals.

Dr. David Colby, Chatham-Kent’s chief medical officer of health, said that option will not be immediately available at local pharmacies. The initiative is currently being rolled out only in the Greater Toronto Area and Ottawa.

There is concern with laboratory capacity in processing all the tests, Colby said. As a result, there are conversations at the provincial level to prioritize the results of symptomatic individuals.

On Thursday, 409 cases of COVID-19 were reported throughout Ontario.

To mitigate the effects of the second wave, the government recently reduced the numbers at unorganized gatherings (i.e. social gatherings) to 10 people indoors and 25 outdoors. City councils would be exempt from these harsher restrictions as they are planned meetings.

Despite the exemptions, Chatham-Kent’s council plans to continue with its virtual meeting format until the end of 2020.

“Like everything else, in terms of how we’re doing business, that’s going to be a constant refresher; looking at how things change with respect to social distancing requirements,” said Don Shropshire, chief administrative officer for Chatham-Kent.

Shropshire said council was informally polled on their preferences and although some would like to return to official chambers, the virtual meetings were deemed safer.

“The current system is working. It’s safer. It accommodates all of the requirements for doing council business. So for the foreseeable future we believe it’s safer and more prudent just to stay where we’re at,” he said.

Locally, there were no new cases of COVID-19 reported in Chatham-Kent in the last 12 days. The cumulative total sits at 366 infections to date.

On Tuesday CK Public Health did announce that one student at the University of Guelph’s Ridgetown campus has tested positive for COVID-19.

Colby said as far as he is aware, the student travelled to campus everyday from his or her hometown, and was not living in Ridgetown during school days.

“And of course being positive, they are now isolated,” he added.

Colby estimated that the student had approximately 12 close contacts, all of whom are being isolated and tested. All the tests that have come back so far are negative.