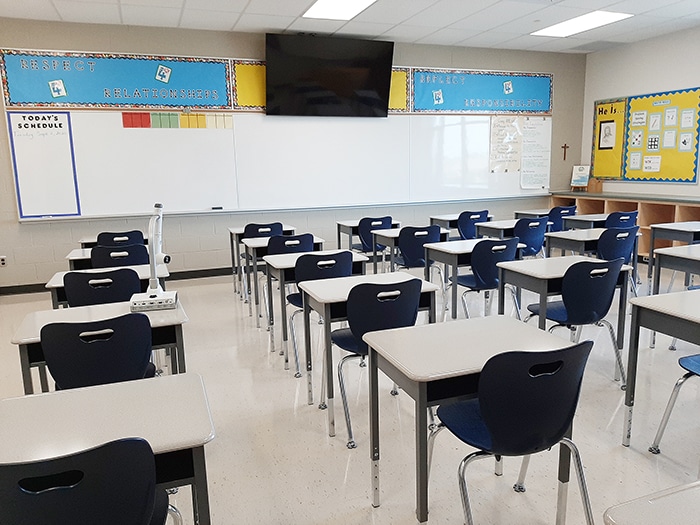 Combined classrooms will not lead to increased numbers in each room, boards say

Chatham-Kent’s school boards are clearing up some misconceptions about combined classrooms as the concept had parents worried it meant more students per room.

“I think there is some confusion about what is going on with collapsing (combining) in school,” John Howitt, director of education, Lambton Kent District School Board (LKDSB), said. “The class sizes have not increased in face-to-face (learning).”

The St. Clair Catholic School Board (SCCSB) and the LKDSB gave a joint press conference on Thursday afternoon to answer some back-to-school questions.

Roughly 14-15 per cent of LKDSB’s secondary students (approximately 1,000 kids) have chosen to move into the virtual school.

Howitt explained that some in-person classrooms were left with nine students in them each, so instead of creating two separate classes, they merged to become one class of 18.

The second teacher then moved to the virtual school.

“Those students who come out of the school, they need a teacher,” he said.

“There will be the odd class that’s a little bit larger; that’s how averages work,” he said.

Twelve per cent of SCCSB’s student body for the elementary schools will be engaging with the virtual learning, and 13 per cent for the secondary students.

The board has reduced its Kindergarten class sizes to 21 students; primary classes have an average of 18 students; junior classes have 22; and secondary classrooms will see around 20 students.

“Again, it’s an average, so there may be a smaller or larger class here or there,” Crawford said.

Twenty-two new teachers were hired to keep class sizes down and provide more instructors for the virtual school.

SCCSB, which has been undergoing consolidation of its school over the past few years, has no plans in the works just yet to use the empty school buildings.

“We’re finding that if we did have large classrooms, we’d be looking at using larger spaces in schools. So we can use the library to allow more physical distancing, as opposed to the classroom if that became necessary,” Crawford said.

She added that if there is ever a more pressing need to find additional space for social distancing purposes, then it may be an option considered down the road.

“We would look at that as a possibility. But not at the present time.”

Crawford said parents cannot opt in or out when they want because the boards need time to plan for the changes.

“ I don’t think the parents in a face-to-face class would be very happy to move from 18 to 28 (students). So we’re going to have to reorganize and restaff again,” Howitt explained. “If we can accommodate before then, if it’s small numbers, we will. However, if it is bigger numbers that require resizing and shifting of staff … we need some time to do that to make sure we maintain those small class sizes.”

All students, for both boards, in the face-to-face model will be set up on a digital learning system when they start the academic year. In the event a school needs to close, they can easily transition to an online model with their classroom teacher. The virtual students would remain enrolled in the virtual school.

At the beginning of the pandemic, when schools first shifted online, students were told to do as much as they could handle under the unprecedented circumstances. Now that months of planning have passed, it will be business as usual for the virtual schools.

The full curriculum is being taught virtually and secondary students are still required to meet their 110 hours per class as they would normally in a face-to-face environment.

“An enhanced teacher-led learning will make the difference than when we went out in March,” Crawford said. “With the teacher working independently, you’ll see a change and it’ll be quite different than the model that was experienced from March to the end of June.”

Extracurricular activities and sports are on pause for the time being until the boards can figure out how to run them safely.

Crawford said they have yet to look at how they can integrate the virtual students in extra activities, when they resume, to give students the best experience possible.