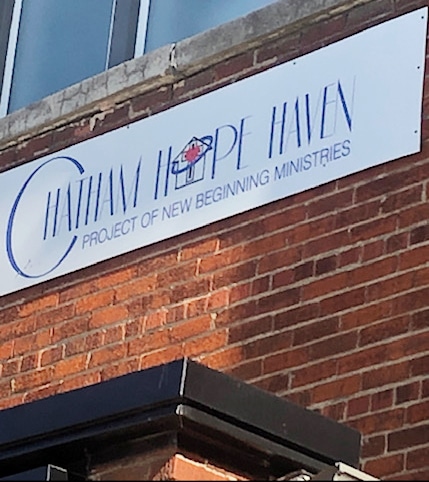 Chatham’s Hope Haven for local homeless people is set to reopen later this month, but will, for now, look much different than it did prior to its closure due to COVID-19.

Whereas for the past three years the shelter offered overnight accommodations for up to 14 people, it will in the short term reopen for three days a week to offer some day-time respite from the heat.

Loree Bailey, general manager, said the Haven will reopen June 22, from 10 a.m. to 2 p.m. to in part serve as a cooling station.

“We can help with a cool drink some lunch, a shower and laundry if needed,” she said.

The municipality set up a temporary homeless shelter at the Bradley Centre in late April after Hope Haven shut its doors several days earlier due to COVID-19. Bailey said many of the users of the temporarily shelter on Richmond Street West still come to the downtown core on a daily basis, and with the hot summer weather upon us, it made sense to reopen to some extent to help during daylight hours.

“There is a need for a cooling station uptown,” she said. “We have the facility and we certainly have the desire to do everything we can.”

Hope Haven will, for the short term, be open Mondays, Wednesdays and Fridays.

As for how many people Hope Have will allow in at a time, Bailey said that is still to be determined.

“It will be at a reduced capacity. We are still working on physically changing the space, so we can’t commit to an exact number right now,” she explained. “We think it is going to be between seven and 10 (people at one time).

“The most important thing is keeping everyone safe. We’ll have two volunteers on hand. If we’re finding there are a lot of folks coming, we’ll either extend the hours or limit the length of visit per person.”

Bailey said Hope Haven hopes to return to offering overnight accommodations for local homeless people when the pandemic is over.