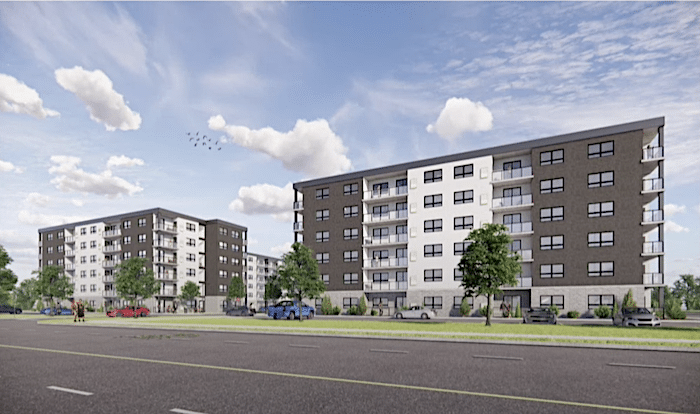 Chatham-Kent council is moving forward with a housing development project on Park Avenue West in Chatham, despite concern from residents that the virtual meetings are preventing them from expressing their opinions.

On Monday night, council received written deputations from residents who were concerned that their voices weren’t properly being heard regarding the proposed zoning and official plan amendment for two apartment buildings in southwest Chatham.

The approved amendments now allow for the construction of high-density residential buildings.

The new units are located on the southern side of Park Avenue West between Keil Drive West and Wedgewood Avenue.

Each complex, 22,433 sq. ft. respectively, will house 122 units, intended to be run at market rates and not geared to social or affordable housing. No other building in the area has a height of six storeys.

Recreational facilities and swimming pools will also be available on site for the tenants.

Eighty per cent of the units will have one bedroom and 20 per cent will have two bedrooms.

Bruce McAllister, director of Planning Services for the municipality, said the 6.5 acres of the area has been undeveloped for years.

The previous plan for southwest Chatham (starting from Wedgewood running between Park Ave., Indian Creek Road West to Howard Ave. including a subdivision of Bloomfield) allowed for low to medium density buildings, and was approved in 1991.

“For years, this area has been slow to develop. But certainly development activity has increased over the past several years. I would say in the last five, six years things started to develop,” said McAllister, adding that he can speak to the point because he lives in the area.

Since residents can no longer attend council due to the virtual measures put in place due to COVID-19, members of the public who wish to comment must write their concerns or support to council.

Eight letters, representing 17 people, were sent to council, voicing concern that the new development would affect their property taxes, create sun blockage, make driving across the road dangerous due to the increased traffic and create noise distribution.

“My property will decrease in value substantially. It will be a huge eyesore. I understand about development but it will have a huge impact on our neighbourhood so who is going to pay me for the losses I have sustained? No one wants to have a house right next to a six-level apartment building,” wrote one resident.

Another resident even expressed intent to move their family out of Chatham should the two buildings go up.

Other residents asked council to postpone its decision.

“Due to the recent global pandemic of COVID-19, I respectfully ask that you temporarily put this project on hold until such time as there is input from all concerned parties,” read one deputation written from a resident living on Park Avenue West. “They should not be allowed to proceed when the entire community is in lockdown from the virus for all non-essential business. There seems to be a rush to push this through. There is no need to rush in fairness to all parties.”

McAllister said normally a notice of application is given three weeks in advance, however, with their assessments done early they gave the public notice seven weeks in advance, sent out before the COVID-19 order was put in place.

Additional instructions to provide feedback were also sent out once the order was in place. McAllister said the developer also held a virtual open house, which is not legally required, on April 16 to answer any questions, and the municipality mailed out additional hard-copy materials.

The applicant listed on the report is a numbered company, 1544951 Ontario Inc. c/o Robert Piroli.

Chatham Coun. Michael Bondy put forward a motion to postpone the decision until council could resume in person, which no other councillor seconded.

The vote was approved 15-1, with Bondy the sole councillor voting against the zoning and official plan amendments.

The decision to defer would have negatively impacted the development, said David French of Storey Samways Planning.

“Time is of the essence for the project. We do have an agreement of offer and purchase with the church to purchase the property, which expires shortly. If council were to defer a decision tonight, the project would be shot,” he said.

McAllister said the front and rear of the building will be built further back to provide additional landscape open space. The parking ratio has been decreased from 1.5 spaces per unit to 1.25.

There will be no balconies facing Bristol Drive and trees and fencing will be provided to give privacy to both the tenants and neighbouring houses.

McAllister noted that housing conditions and policies have changed since 1991 and it is now encouraged to support housing of different types and densities through infilling and intensification.

“Development is compatible with the existing area,” he said. “High density residential use is not incompatible from a planning perspective.”