Normal? Take it where you can…the backyard, for starters

Apr 16 • Bruce Uncorked, Feature Story • 3 Comments on Normal? Take it where you can…the backyard, for starters 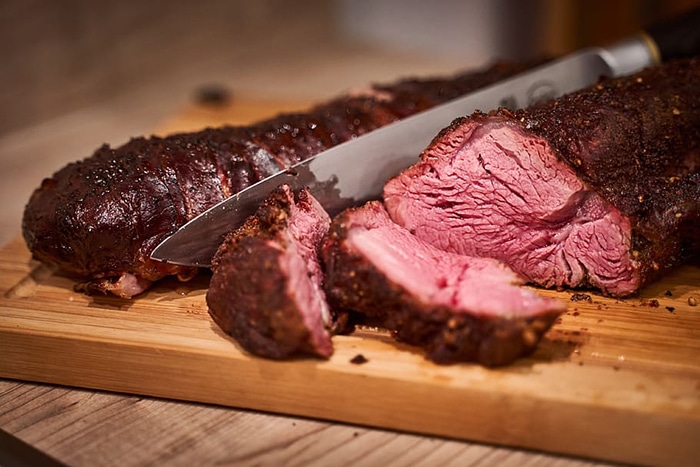 Self-distancing means a lot more cooking, and more time to do so. Bruce and the Corcorans enjoyed some incredible beef tenderloin over the weekend, picked up at Schinkels’.

Everything is so much different, yet too much the same these days.

The COVID-19 pandemic has been a strange experience so far for all of us. You seek a sense of normalcy, but know nothing is really normal right now.

A trip to the office in the morning shows me how everything is out of whack. I don’t stop by Ursuline College Chatham to drop off my daughter, but instead head straight to the office, and face very light traffic.

Grocery stores, where I used to stop three or four nights a week to pick up items as needed, are now zones of concern. You go there maybe once or twice a week at most, trying to pick the quietest times so you are in the store with as few people as possible. Go with a list. Get your stuff, pay, get out as fast as possible.

And maintain as much difference between yourself and other shoppers as possible.

For anyone not doing this, I have to ask, what are you thinking?

To flatten the COVID-19 curve – to slow down the rate of infection and spread it out as much as possible – is to save lives and hopefully not overload our health-care system. A huge way of doing that is avoiding close contact with other people.

But you walk into a grocery store and encounter people of extremes. You have the folks wearing the N95 protective masks that should be reserved for health-care workers, the smart folks wearing fabric masks, others who aren’t wearing a mask, but are keeping distant, and others who behave as if nothing is out of normal.

I’m talking about the folks who act like civil disobedience at this time is “cool.” Or the young mother that brings her three young children into the store with her. These are the folks who set off your mental alarm bells. They have no care or clue of the potential exposure they are putting on themselves and others. And it honestly scares me.

Too many people behaving in this manner will only lengthen the government imposed measures to have people self-isolate and self-distance.

Many people are staying home as much as possible, however, especially with so many businesses shut down.

Our offices are closed to the public, we aren’t putting out a newspaper (100-plus carriers, each going to 50-100 homes, touching railings and mailboxes didn’t seem smart to me), and we have layoffs.

Some of us are working, but very differently. Several are at-home only, while a couple of us are in and out of the office, maintaining social distancing along the way.

For me, it’s weird. I am able to work from home for the most part, but the “feel” of normalcy is being at the office. Then again, these days, that office is usually empty and dark, save for my office light.

It is a strange experience for all of us. And we all certainly want it over as quickly as possible. But that means continuing to self-distance, wash your hands regularly and try to avoid touching your face.

What we are seeing, however, are many more people out for walks around the neighbourhood than in the past. More time on one’s hands can do that as people seek a release of pent-up energy.

We’ll get through this. And it will happen more quickly if we all do our part to maintain the self-distancing.

The Big Green Egg has been getting a workout in our backyard of late. I would love to say it’s only because of the warmer weather, but the reality is COVID-19 is really limiting what folks can do.

But burning lump charcoal to cook meat in one’s backyard inside a ceramic cooker is one of the safe things we can do, and it happens to be delicious.

Easter dinner for the Corcorans on Sunday consisted of a wonderful, magical, uber-tender beef tenderloin. I stopped by Schinkels’ Gourmet Meats on Thursday looking for weekend barbecue options. I snagged some chicken burgers and more chicken breasts (can you tell the Corcorans are on a bit of a chicken kick these days?), and John Schinkel suggested I walk out with a cut of beef tenderloin.

I have to thank John, as it was delicious.

For anyone who has never cooked beef or pork tenderloin, these are extremely lean cuts of meat, and that can make them a bit challenging to cook and keep moist at the same time.

For many grillers who own smokers, the first impulse is to put it on low and slow heat. But for the tenderloin, I took the oven approach.

For starters, I encrusted it in a coffee rub I have, thanks again to Schinkels’. I offered up a trio of seasoning selections to my wife, Mary Beth, and she (no surprise, really) chose the coffee rub. It works so well on most any cut of beef for us (we’ve done prime rib with it too).

So after about 60 minutes warming up to room temperature and allowing for the seasoning to penetrate into the meat, I placed it on the grill of the Egg, on indirect heat, at about 375 F, with a drip pan partially filled with water below it. I would tell you how long it took to cook, except I wasn’t paying attention. Maybe an hour, maybe less. Sorry, I was relaxing in the backyard, listening to the birds and the wind chimes, and rock & roll.

I relied on my Traeger remote meat thermometre to keep track of the internal temperature of the tenderloin, and the Egg. When the meat reached about 128 F, I pulled it off and tented it for 10 minutes in foil.

The result was a medium rare bit of deliciousness.
It was actually a bit difficult to carve, as it was so tender it wanted to instead fall apart. On the plate, you could cut it with a normal bread knife.

And once you placed that first morsel of beef into your mouth, it just seemed to melt.

It was a hit with all of us.

Mary Beth said it was the best piece of beef she’s ever eaten, better than even Kobe beef she had while on vacation a couple of years ago.

I’ve done prime rib on the egg, and it has come off wonderfully tender, but this tenderloin, with its lack of fat and shorter cook time, was even better.

3 Responses to Normal? Take it where you can…the backyard, for starters