On Saturday, dozens of U-Haul trucks and cars drove down Erie Shore Drive, in single file, as homeowners constructed the final reinforcements for their homes and packed up their most important belongings.

As of midnight on Monday, the road was to be closed off, and homeowners do not know if they will ever see their property again despite council’s motion that it would only be temporary.

“It’s only a matter of time until I am next,” said Frank Sparks, 56, referring to neighbouring properties that have seen their break walls washed away from flooding.

Sparks had been reinforcing his property for several months but believes, with no one to monitor the situation, the homes of Erie Shore Drive could be under water in a matter of weeks.

“Everything we worked for is being taken away,” Sparks said.

Homeowners said some inland residents have been criticizing and questioning Erie Shore Drive homeowners on social media for their decision to buy homes so close to the shoreline. But Sparks, whose family built several homes on the road, said there was once 200 feet of walkable beach and much lower water levels.

Resident Sonya Knipfel bought her house in 2013, not for the beach, but for her late son who passed away at the age of 14.

“It was his favourite place, so I bought a house here with the money I got when he died. Now I will lose the memories of my son. It’s very emotional and hard not to get mad and punch something,” Knipfel said.

Jeoff Dennis, 55, bought his home in July as his permanent home and retirement plan. He said he was never informed of the shoreline issues when he moved to Chatham-Kent from Hamilton.

“I was told from my realtor and the community that we never had to worry (about flooding) because of the drainage ditch,” he said. “I expected the water but not this much erosion. Compared to July, this place now looks like a war zone.”

While the city cannot legally evict residents, the majority are leaving because of the lack of access to their properties and the dangers of flooding. With a mortgage left to pay, and relatively new to town with nowhere to go, Dennis is one of the few choosing to stay behind.

Dennis said he plans to park his car at a neighbouring property not affected by the road closure and walk through the private properties to reach his home. He only plans to leave his home to shop for necessities.

Rose Peseski, a permanent resident of Erie Shore Drive, and nurse, said she is worried about those staying behind.

“As a nurse I am concerned about potential health problems for some of the residents staying behind. They paid taxes all of their lives and should be entitled to have access to their ambulances and emergency services.”

“I am concerned (about the lack of emergency services) but what can I do?” Dennis said.

Peseski has physical health problems of her own with a bad back and would not have been able to move out if it were not for all the volunteers who assisted over the weekend.

“I don’t know what some people would have done (without the volunteers), and that’s the scary part,” she said.

Jason Church, owner of JTC construction who worked on the Erie Shore properties for the past six months, led Saturday’s volunteer effort, bringing in more than 60 people.

“We met at Erieau and spent the first hour trucking people in so we didn’t congest the road,” he said.

Church estimated that volunteers helped more than 25 households move their belongings and filled around 300 sandbags to help reinforce the properties from the waves.

For half a year Church had been doing some work for free or at a fraction of the cost.

“A buddy called me up one day to look at concrete that had cracked,” he explained. “When I came out here I could not believe what I saw and thought ‘how is no one helping?’”

“Now I know a lot of these residents personally and I bring this work home with me. I think ‘is it good enough?’ I feel like we lost,” he said.

Kyle MacNeil heard about the situation on Erie Shore Drive from church and came out to help reinforce homes over the past several months. On Saturday, MacNeil, owner of the Market Restaurant, donated his time, food and barbecue to serve more than 120 hamburgers and 150 hot dogs.

“It’s the right thing to do. There are a lot of people helping out and a lot of residents who need to eat. So this is what I can do to help,” he said.

“The community has always stuck up for each other,” Sparks said.

According to Peseski, Coun. Amy Finn was the only city official that had helped residents throughout the course of the week.

“She is the only one from the city I’ve seen here for the past four days. Even her sons came to help. I could not do it without her,” Peseski said.

By 5 p.m. most of the volunteers and residents had packed their belongings, and, one by one, drove off.

Church thinks there are several houses that will inevitably fall unattended but said that the homeowners who have been proactive in reinforcing their homes have a chance.

“We’ll be back,” he concluded. 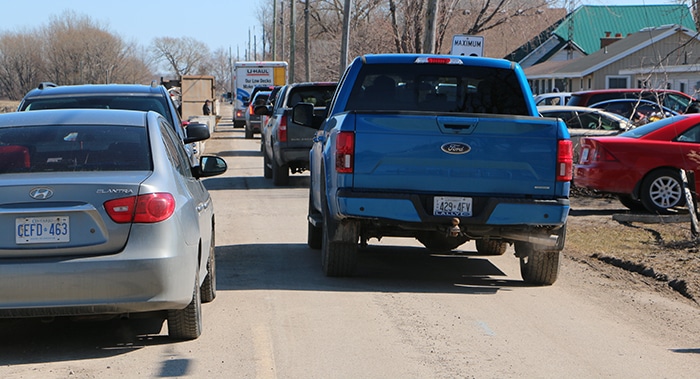