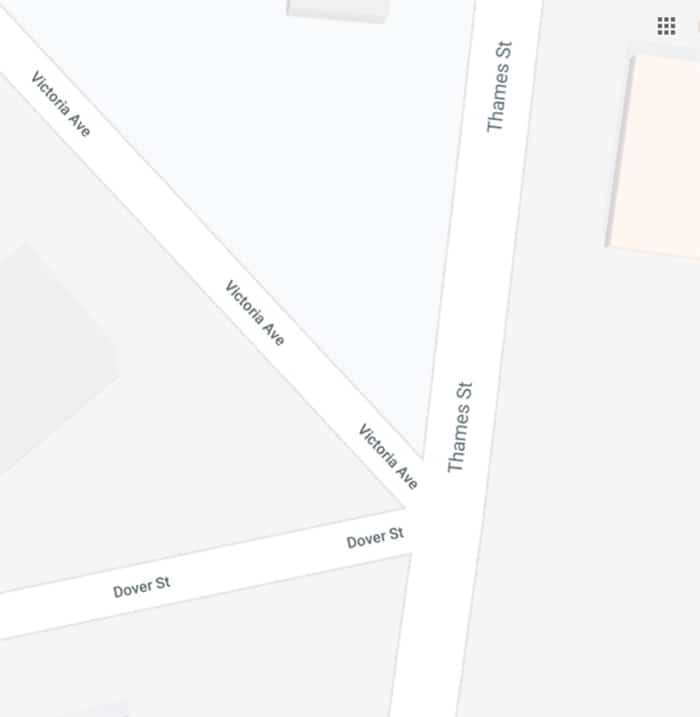 This Chatham corner looks complicated, but it isn’t hard to tell who has the right of way on turns.

Dearest Chatham-Kent drivers and smokers:
You drive me bonkers!

What’s worse, you are breaking the law, again and again.

I think some of you don’t realize what you are doing is illegal, others aren’t sure, and the rest just don’t care.

Let me first address the annoying “Chatham Left.” This is when someone turns left onto a four-lane road and immediately goes into the far lane, the curb lane.

According to police, you must make a proper left turn – turning into the left lane – and then signal to change lanes into the curb lane.

Yet here in Chatham-Kent, that seems like such an alien thought.

A cop could sit at the corner of Grand Avenue and St. Clair Street and hand out fines to two-thirds of the people who are turning left in any direction, but especially people that are facing west on Grand and turning south on St. Clair/Third Street.

Yeah, this is a pet peeve of mine.

When the left-turners have an advanced arrow and I’m turning right going in the other direction, I like to start my right hand turn facing these people and watch them freak out when they think I’m going to cut them off. In fact, I don’t complete the turn, but drive defensively to wait for an opening, because I know too many of these drivers will immediately head into the curb lane. Better safe than right, but sorry.

Still, it’s fun to creep ahead a bit and get the angry/panicked look from the folks who are in the wrong.

It is not the fault of we non-smokers (well, maybe it is) that cars no longer have ashtrays, but your cancer-stick butts are still your own responsibility.

And that’s just in town. Think about what can happen when you toss your nearly inhaled leftovers out of the car window in the countryside, especially in dry conditions. How many forest fires or brush fires are started by the careless discard of a cigarette butt? Too many.

Speaking of tossing stuff onto roadways, how about those people who shovel their driveways and push at least some of the snow right out onto the roadway?

Yes, that’s illegal too. And the guys running the plows hate it.

It’s one thing to encounter a pile of slushy snow on a side street as a plow jockey and push it out of the way, but for the guys driving down a rural road who hit the pile of snow at higher speeds, it can be dangerous, especially if the snow was heavy and wet and has since frozen into a road-berg.

And think about drivers in general. Not good to hit these snow piles, as it could cause a driver to lose control at any speed.

Keeping with drivers, I love angle parking in downtown Blenheim and wish Chatham’s downtown had the same style of parking. You’d get more parking spots that way.

But what I don’t like, and I admittedly haven’t seen it in Blenheim so far, but have elsewhere, is when someone backs into an angled spot.

You are facing the wrong direction when you go to pull out.

And then there are the drivers who don’t comprehend the rules of the road, specifically at the crazy corner of Thames/Fifth, Dover and Victoria streets just north of the Fifth Street Bridge.

It can be a busy spot, depending on the time of the day.

Picture someone intending to turn left off Thames Street onto Dover Street, with traffic coming south on Thames, and a person waiting to turn right onto Thames from Victoria.

Sounds confusing. Apparently it is for some people.

Chances are the last person to complete the turn will be the person trying to get onto Dover.

Why? Because the driver on Victoria doesn’t know the rules. They’re stuck at a stop sign. Everyone has to wait for the southbound traffic to clear, but after that, the driver on the through street – Thames – has the right of way, not the person at the stop sign.

But here’s what happens: The driver on Victoria assumes the person turning left is going to turn onto Victoria, so they move out onto Thames Street.

Or they just behave in a selfish manner and turn in front of the person who has the legal right to make their left onto Dover, and act incredulous when you hold your hands out in exasperation at them.

That corner can be about as frustrating as the parking lot at the Real Canadian Superstore used to be before the concrete barriers went into place to prevent drivers from going through parking spots rather than use the designated laneways near the LCBO there.

End of middle-aged rant. Please obey the law and respect other drivers.

Bill got the sauces from his son who obtained them in the U.S., but it seems Bill’s wife is not a fan of such heat, so he thought of me instead of tossing them into the trash.

All four are made by Bull Snort, and have hilarious names.

Texas Tail Torcher, Butt Burner, Fire in the Hole and Cowboy Cayenne are my options.

I’m admittedly almost fearful to open them. Two are made with habanero peppers, one with jalapenos, and the fourth with “just” cayenne.

I think just sniffing the Tail Torcher could scorch a person’s nose hairs. I’ll have to share these offerings with Eggless Chad, a guy who really appreciates heat in his food.

Bill, thanks for the challenge, good sir.