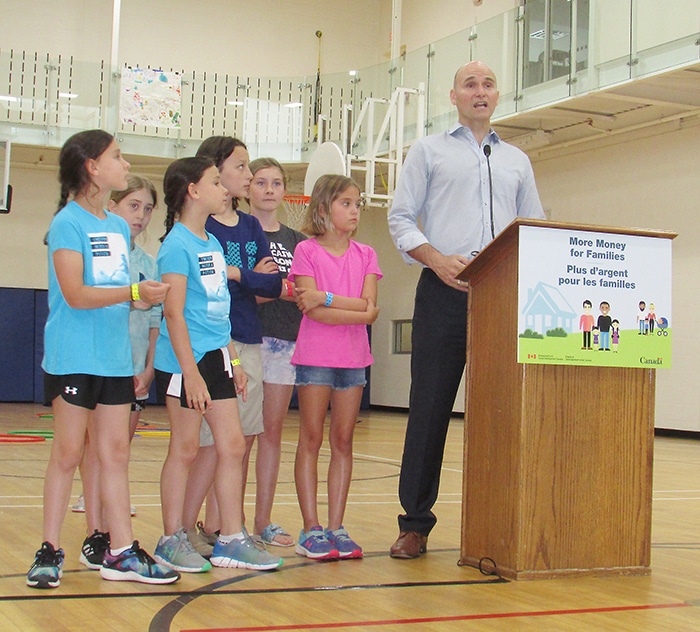 Jean-Yves Duclos, Minister of Families, Children and Social Development, discusses an incremental increase to the Canada Child Benefit at a recent announcement at the YMCA in Chatham as local summer camp kids look on.

The federal government picked Chatham-Kent as the place to announce an incremental increase in its Canada Child Benefit (CCB) July 17.

Jean-Yves Duclos, Minister of Families, Children and Social Development, made the announcement in the gymnasium of the Chatham-Kent YMCA, with young members of the summer camp program at the Y looking on.

In fact, he briefly played games with the kids before making the announcement.

Duclos said the riding of Chatham-Kent Leamington, where Conservative MP Dave Van Kesteren is retiring this year, was an excellent place to make the announcement the Trudeau government is upping the CCB two years ahead of schedule.

“This is a perfect example of a middle class community that has grown its economy in the past couple of years,” he said. “About nine families out of 10 receive it (the CCB) in Chatham-Kent alone.”

Those nine families will receive an average of about $200 more a year, he added.

Duclos said a typical family with two children earning a combined $55,000 a year received about $700 per month from the CCB. That will go up another $30 per month.

The benefit is designed, Duclos said, to provide lower and middle-income parents with more money to help pay for things such as food, sports programs and music lessons for their children.

“Young families typically have lower wages as they start their careers. This is when the money is tight and we want to help them. The price of everything is going up and the plan is to index it (the CCB) to keep increasing it with the cost of living.”

Across Canada between July 2017 and June 2018, more than 3.7 million families received in excess of $23 billion in annual CCB payments.